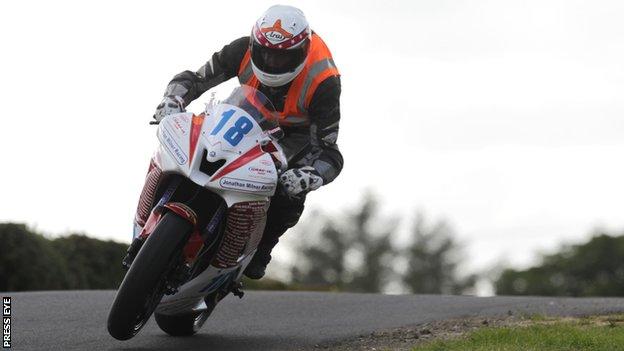 A promising young motorcycle racer has died from the injuries he sustained in an accident at the Dundrod 150 race meeting on Thursday.

Lee Vernon, 24, from Stoke-on-Trent, crashed on the fourth lap of the Superbike event at the Rock Bends section of the circuit.

He was taken to the Royal Victoria Hospital but died on Friday.

Ulster Grand Prix clerk-of-the-course Noel Johnston described Vernon as "a credit to the sport and to his family".

"I am deeply saddened by the news of Lee's death - he first came to Dundrod as an 18 year old novice and has been back every year since.

"He was a lovely lad and will be sorely missed," added Johnston.

"The Dundrod and District Motorcycle Club wish to extend their heartfelt sympathies to Lee's family and circle of friends," said a statement from the organisers.

The Dundrod 150 races were being held in advance of Saturday's main Ulster Grand Prix meeting.

Vernon had earlier finished fifth in the Supertwins race, equalling a similar result which he achieved in the 250cc class at the Ulster Grand Prix last year.

The motorcycle mechanic was a regular competitor at the North West 200, Isle of Man TT and Ulster Grand Prix in recent years, and also competed in a number of other smaller public road and short circuit events.

He took a podium position at the recent Armoy road races and also secured a number of impressive top-10 finishes at the highly regarded Southern 100 meeting on the Isle of Man in July.

Vernon is the second rider to lose his life at an international motorcycle meeting in Northern Ireland this year, with Mark Buckley having died at the North West 200 in May.