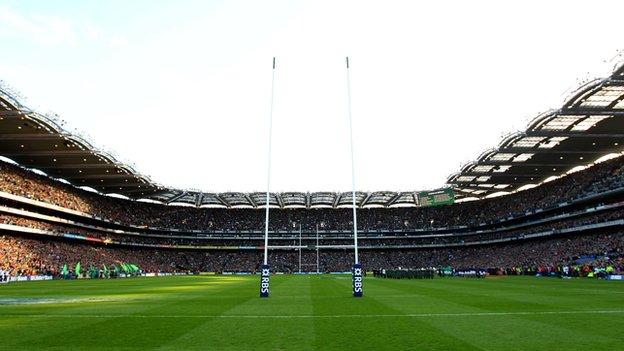 Ireland's bid to host the 2023 Rugby World Cup has been boosted after the GAA opened the possibility of allowing a number of its grounds to be made available for the tournament.

The GAA's Central Council decided on Saturday to ask the organisation's annual Congress to amend its rules on the issue.

The IRFU's bid would not be possible without the support of the GAA.

Casement Park in Belfast is among six grounds earmarked for World Cup games.

The Aviva Stadium and Thomond Park are the only rugby grounds which would be suitable for a major tournament.

In addition to Croke Park and Casement Park, the other GAA grounds which would be part of the IRFU's bid are Pairc Ui Chaoimh, the Limerick Gaelic Grounds, Fitzgerald Stadium in Killarney and Galway's Pearse Stadium.

The IRFU has said that significant government funding would have to be forthcoming for a bid to be considered.

However, the likelihood of the GAA making its grounds available as part of a proposed bid increases the possibility of the IRFU commissioning an official feasibility study into the project.

"The Rugby World Cup in New Zealand showed what a country of four million people could achieve in terms of attracting visitors and showcasing the potential of a country, so an overall Ireland bid is something that the government was keen to discuss with us," said IRFU chief executive Philip Browne on Saturday.

"I think everybody is aware of the benefits from both a social and economic perspective that would come from hosting the third largest sporting event on the globe.

"We are at the early stages of examining the feasibility of a bid and part of this study is to determine the interest and support of Government and other relevant bodies."