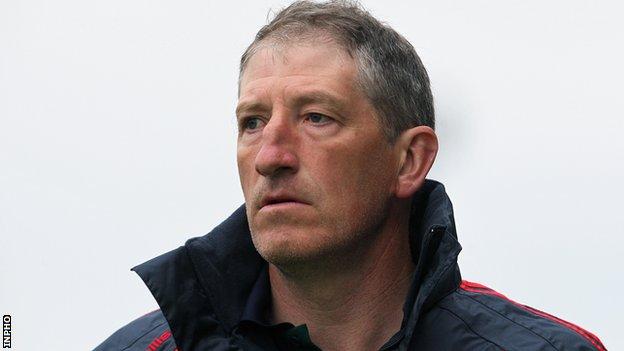 The Antrim GAA board confirmed Ryan's appointment as the successor to Jerry Wallace at a meeting on Monday evening.

An Antrim statement said two "excellent" candidates had been interviewed with the other hopeful understood to be Michael Johnston.

"However in the end the committee had to make a decision and ultimately we believe that Kevin is the right man for the Antrim job," added the statement.

"Kevin is very clear about where he believes Antrim should be and how we can improve on our current position.

"Everyone in Antrim has high hopes for the hurling team and we all want success.

"Kevin has the best wishes of everyone in the county and we are looking forward to the new season."

Ryan's backroom team will be appointed in the coming weeks.

With Loughgiel manager PJ O'Mullan opting out of interview process because of club and personal commitments, Ryan emerged as the strong favourite to land the job.

Gregory O'Kane was also nominated for the job before joining O'Mullan in opting out of the process.

O'Kane was a selector under Dinny Cahill and Wallace before stepping away from the role at the end of April.

Corkman Wallace resigned after Antrim's shock Leinster Championship defeat by Westmeath and a combination of Frankie Quinn, Collie McFall and Jim Nelson assumed control during the remainder of a chaotic summer.

Antrim's season the went from bad to worse as they exited from the All-Ireland qualfiiers after a humiliating 8-26 to 1-15 defeat by Limerick.

A week later, Antrim clinched their 11th straight Ulster senior title as they accounted for Derry but the provincial victory didn't mask another poor summer for the Saffron hurlers.