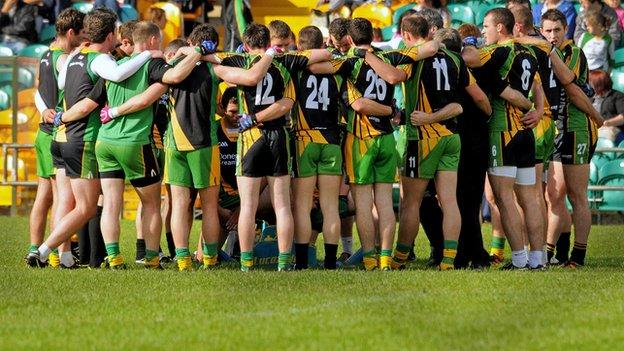 Wing-forward Ryan Bradley, who had to come off during the semi-final win over Cork because of a shoulder injury, has retained his starting place.

Mayo have one change, with Colm Boyle replacing Chris Barrett at half-back.

Boyle missed the semi-final win over All-Ireland champions Dublin because of illness.

Lee Keegan, who dislocated a finger in that game, is fit to play in the half-back line and, in the continued absence of Andy Moran, keeper David Clarke retains the Westerners' captaincy.

Donegal have won the championship just once in their history - in 1992 - while Mayo have not lifted the famous Sam Maguire Cup since 1951.

Mayo, who the bookmakers rate as 11/5 outsiders, had a relatively easy run to the final, seeing off Leitrim, Sligo, Down and an under-par Dublin.

They face a big challenge in getting enough scores against a Donegal defence which conceded only 1-11 against Cork and 1-10 against Kerry.

"Donegal are a good team, but we have been scoring heavily in the games we have played this year," said Mayo manager James Horan.

"So, we have a lot of confidence in what we can do."

If experience counts for anything, Mayo will fancy their chances as several stalwarts survive from the heavy 2006 final defeat to Kerry - goalkeeper Clarke, corner-back Keith Higgins and forward Alan Dillon.

Mayo may be glad just to be playing some team other than Kerry in the big occasion, as their last three final appearances resulted in them losing to the Kingdom.