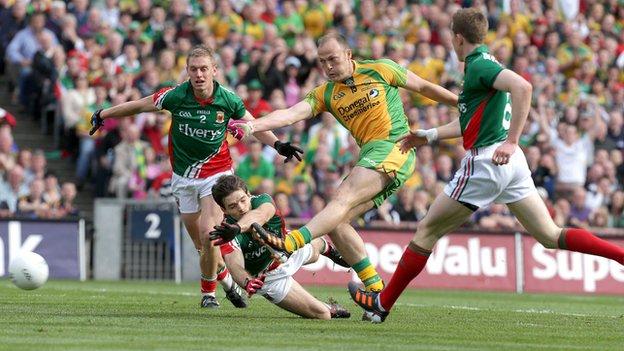 Donegal have won the All-Ireland Football Championship for only the second time by beating Mayo in the final at Croke Park.

Underdogs Mayo fought back and were just 2-4 to 0-7 down at the break.

However, Jim McGuinness's Donegal picked things up again in the second half to emerge worthy winners.

So, another disappointing day for Mayo on the big day out in Dublin - they have not won an All-Ireland final since 1951.

James Horan's Connacht champions had been regarded as a defensively tight unit in the 2012 campaign, but they were left reeling by those two early goals.

The Mayo heads had dropped briefly when the second goal went in and there must have been momentary concern that the GAA's big showpiece occasion could dissolve into a disappointing no contest.

Donegal had raced into a seven-point lead inside the opening 11 minutes but Mayo did well to gain the momentum later in the half and be just three in arrears at the interval.

Mayo defender Lee Keegan was then guilty of a high challenge on Mark McHugh. That gave Keegan a yellow card and McFadden the easy task of converting the free.

Then came the second Donegal goal. Patrick McBrearty's effort came off the far upright, defender Keane missed a chance to collect and McFadden capitalised by drilling a low shot into the net.

Donegal, 2-01 to the good, could have led by double figures but Clarke made a good close-range save from McFadden's shot.

Mayo got their first point in the 16th minute through Kevin McLaughlin and Cillian O'Connor added a free.

Buncrana half-forward Ryan Bradley advanced to add to the Donegal score but then Mayo were boosted by four unanswered points through McLoughlin, two O'Connor frees and a splendid effort from out wide by Michael Conroy.

McFadden, who came into the game with a 2012 Championship tally of 3-28, added two more frees before the break with Enda Varley and another O'Connor free ensuring Mayo trailed by just 2-4 to 0-7 at the turnaround.

The early stages of the second half were evenly contested with McFadden and Murphy tagging on frees and Frank McGlynn scoring from play for Donegal, and Cillian O'Connor (2) and Enda Varley landing frees for Mayo.

Two more frees and a point from play by Murphy edged Donegal towards the finishing line.

Replacement Richie Feeney and Keegan scored for Mayo while Neil Gallagher registered a score for Donegal.

Another Mayo substitute Jason Givens landed the final point but there was no denying Donegal their historic triumph in front of 82,269 spectators at GAA's headquarters.