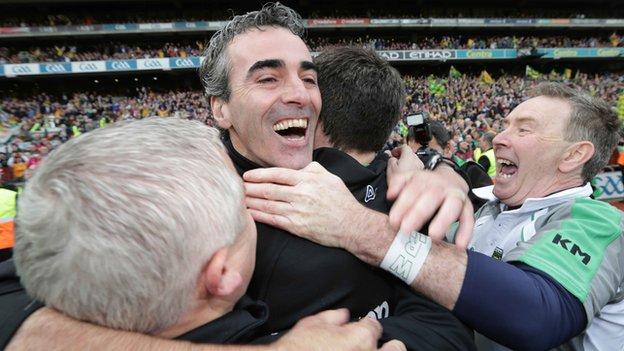 Donegal manager Jim McGuinness savoured the celebrations at Croke Park after their win over Mayo in the All-Ireland football final.

"It was pure joy and emotion at the end. Donegal is a football-mad county," said McGuinness after his side's 2-11 to 0-13 win.

"To win the All-Ireland is something these players has been dreaming about since they were young boys.

"To get over the line is fantastic for them. Actually, it is life-changing."

Donegal captain Michael Murphy, who scored the first goal inside three minutes, said it would take time for the success to sink in.

"It is unbelievable. To see so many smiles on so many faces is great," said Murphy.

"It was a boost to get those early goals. We did not really capitalise on them in the latter stages of the half.

"Mayo came back and we were hanging on a bit, but we are delighted to have made it."

Mayo manager James Horan felt his side were never out of contention - despite Donegal's early double-goal blast.

"To give seven points away at the start of an All-Ireland final against a team like Donegal is hard to come back from," said Horan.

"But, with 10 minutes to go, it was still there for us if we had shown more composure.

"The guys kept going, although Donegal deserved their victory and good luck to them.

"We have to take it on the chin, but this Mayo team is improving all the time."