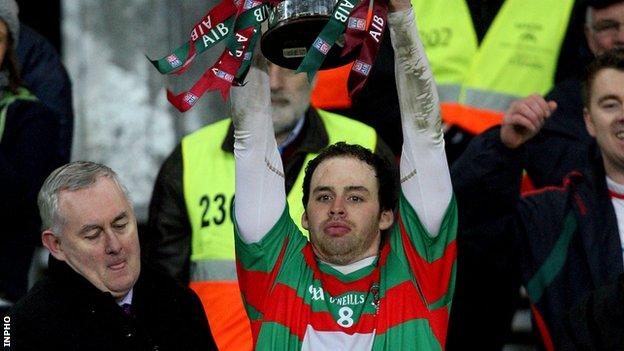 Saturday's Fermanagh SFC final is certain to be an emotional occasion as Lisnaskea face Tempo at Brewster Park (19:00 BST) in their first match since Brian Og Maguire's tragic death.

Lisnaskea will be aiming for their first county title since 1994.

All-Ireland champions Loughgiel take on Dunloy in the Antrim SHC final at Casement on Saturday evening (19:00).

St Gall's will be overwhelming favourites in Friday's Casement Park.

The Milltown Road club go into the final boosted by last weekend's triumph in the All-Ireland Sevens at Kilmacud.

Kevin Niblock and the McGourty brothers CJ and Kevin starred in that success and Gall's don't appear to have picked up any injuries in their Dublin expedition.

St John's are managed by Gearoid Adams who is being tipped to succeed Liam Bradley as Antrim senior boss.

The Johnnies have not won an Antrim title since their 1998 success when Adams was a member of the team.

Loughgiel will be chasing their third straight Antrim hurling title when they face neighbours Dunloy in Saturday's decider at Casement.

Dunloy's preparations for the final are reported to have included sessions taken by Clare manager Davy Fitzgerald.

While the Cuchulainns are underdogs, one suspects that they may fancy their chances of upsetting the All-Ireland champions.

Loughgiel are reporting a clean bill of health with key forward Liam Watson certain to be among the starters.

Friday night also sees football semi-final action in Tyrone and two quarter-finals down for decision in Down.

Killyclogher and holders Dromore replay their Tyrone semi-final at Omagh (20:30) after a 0-5 to 0-5 draw last week.

The winners of Friday's game will earn a final meeting with Errigal Ciaran.

Both Down quarter-finals take place at Pairc Esler with Saval facing Maybridge (19:00) and holders Burren taking on Longstone (20:30).