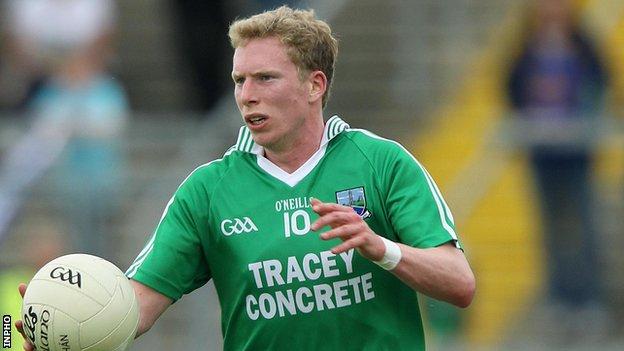 Tempo have won the Fermanagh club football crown by beating Lisnaskea 0-15 to 1-4 at Brewster Park.

It was Lisnaskea's first game since the death of their skipper Brian Og Maguire in a work accident.

The sides were level on three occasions in the first half which ended with Tempo in a 0-4 to 0-3 lead.

Ryan Glancy got Lisnaskea's goal at the start of the second half while brothers Ryan and Daryl Keenan finished with four points each for Tempo.

Tempo had not won the county championship since 1973 while Lisnaskea had been aiming for their first title since 1994.

It was not until the second half that Tempo pulled away.

In the first, Damien Kelly and Ryan Keenan pointed for Tempo with Sean Keenan (2) and Daniel Kille registering for the Emmett's.

Glancy's goal boosted Lisnaskea but Tempo upped the pace and landed five points in a row, two of them by Daryl Keenan.

Gary O'Donnell make it 1-4 to 0-9, but that was to be Lisnaskea's last point of the night and Tempo raced away with six unanswered scores to win comprehensively.