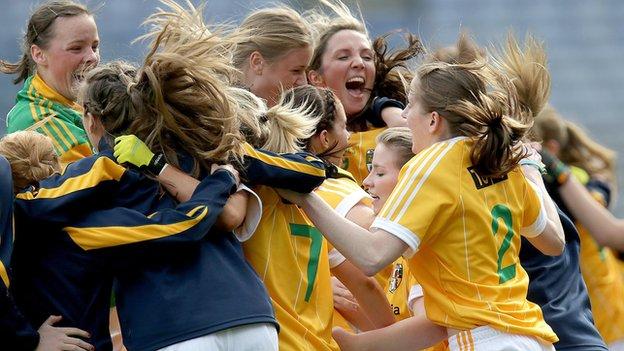 The Orchard team claimed their first ever Intermediate title thanks to a 1-12 to 1-5 win over Waterford.

Armagh's goal came in the ninth minute from full-forward Shauna O'Hagan and they led 1-5 to 1-1 at the break.

Earlier, goals from Kirsty McGuinness (2) and Anna Finnegan helped Antrim to a 3-9 to 0-7 victory over Louth in the Junior decider.

Louth began strongly, but they weren't able to turn their early possession into scores.

McGuinness and Finnegan hit the net to help the Saffrons into a 2-3 to 0-2 interval lead.

Louth fought back, but had no answer with McGuinness bagging her second goal two minutes from the end to ensure an 11-point win.

After the game Claire Timoney (0-4) accepted the cup on behalf of the Antrim team, who were celebrated their first All-Ireland Junior title since 2009.

The Intermediate final was littered with wides and Armagh amassed 13 by the interval.

O'Hagan scored Armagh's three-pointer while Kelly Mallon was on target for Waterford.

Armagh led by seven points entering the final quarter, but were under huge pressure late on with goalkeeper Catherine McAlinden denying Michelle Ryan from the penalty spot.

Meanwhile, Cork cruised to a 0-16 to 0-7 victory over Kerry in the Senior final.