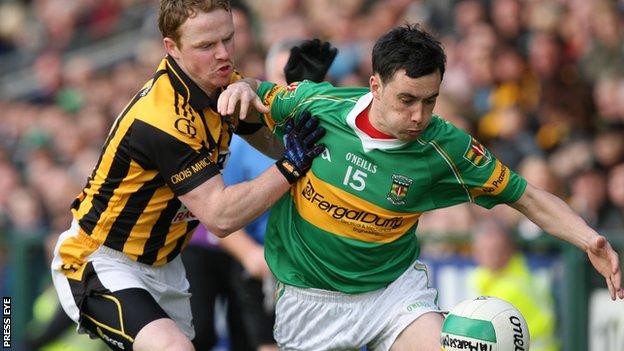 Jamie Clarke hit a Cross goal in the first minute and while Ogs fought back to lead, Tony Kernan's goal put the holders 2-3 to 0-7 ahead at the break.

Ogs only trailed by two points with 11 minutes left but Clarke's second goal made the game safe.

It was Crossmaglen's 16th Armagh title in 17 years.

Pearse Og were reckoned to have a strong chance of dethroning the champions after an impressive march to the final.

Crossmaglen also went into the game minus All-Ireland heroes from last March Francis Hanratty and Danny O'Callaghan following their emigration to Australia.

However, the holders made a fast start with Johnny Hanratty's 17th-second point followed by Clarke's first goal less than a minute later.

To their credit, Ogs regrouped to hit the next three scores with Marc Cullen (two) and Mark Clarke on target.

Arguably the crucial moment of the match came in first-half injury-time as an Ogs scoring chance was tamely hit into Paul Hearty's hands.

Hearty's quick clearance started a breakaway move which culminated with Tony Kernan palming the ball to the net after a perfectly-weighted pass from Clarke.

Anto Duffy's point after the restart left the minimum between the teams but despite staying in touch with an improving Cross in the third quarter, Ogs couldn't get on terms.

Tommy Turley's 49th-minute point left only two between the teams but it proved to be the last Ogs score.

Clarke's second goal put the outcome beyond and he and Aaron Kernan went on to score further late Crossmaglen points as the Rangers clinched a deserved success.