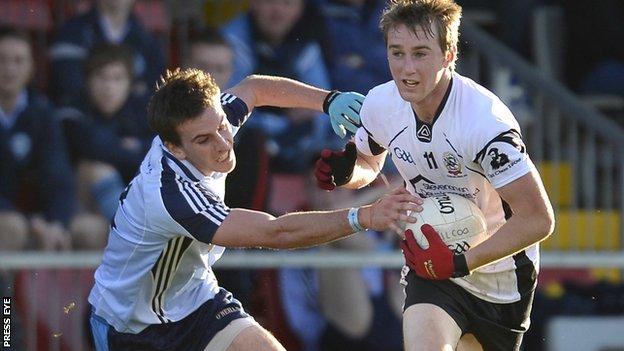 Kilcoo withstood some late pressure to beat Mayobridge 2-8 to 1-8 and regain the Down Club Championship.

Sunday's final in Newry got off to a dramatic start when Conor Laverty pounced for a goal in the first minute.

Kilcoo led 1-5 to 0-5 at half-time and netted another goal through big midfielder Phelim McGreevy.

Mayobridge looked out of it when they trailed 2-9 to 0-6 but a goal by substitute Kevin O'Rourke revived their hopes and they pressed until the end.

Kilcoo, though, got home by three points and will face Monaghan champions Ballybay on Sunday, 4 November at Clones.

Mayobridge will rue conceding that goal right at the start. A bad defensive mix-up between full-back Kevin McClorey and keeper Shealan Strain presented Laverty with an easy tap-in.

Paul Devlin added to the Kilcoo total with four scores, three of them from frees, and Niall McEvoy surged forward for his side's fifth point before the interval.

Kilcoo's second goal came 10 minutes into the second half when McEvoy's long ball was claimed by McGreevy who palmed into the net.

O'Rourke's goal cut the deficit to four and Ronan Sexton then pointed to make it a one goal game.

"We won this three years ago and have worked hard to get it back," said Kilcoo's Conor Laverty.

"It is great for the club and the parish. Football is everyting to us in Kilcoo and we are delighted to get the win."