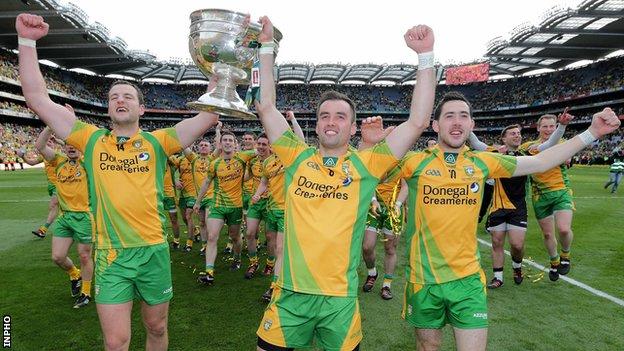 Mark McHugh is named in the half-forwards while captain Michael Murphy and Colm McFadden are also picked.

The team is completed by Cork duo Aidan Walsh and Colm O'Neill plus Dublin's Paul Flynn.

Donegal's eight awards better the county's previous best haul of seven from their only other All-Ireland success 20 years ago.

It is one short of the record haul of nine shared jointly by Dublin in 1977 and Kerry in 1981.

Centre half-back Lacey is winning his fourth award with Neil McGee repeating his honour from 12 months ago.

McGee's brother Eamonn can perhaps consider himself unlucky not to have been named in the line-up.

Goalkeeper Durcan edges out Mayo's David Clarke for the number one jersey while McGlynn and Gallagher earn deserved awards.

Kilcar star McHugh, who emulates his award-winning father Martin, was surely an automatic choice in the side but is named in the half-forward line after his roving commission from wing-back this season.

The McHughs join a list of father/son winners which also includes Frank and Brian McGuigan.

Skipper Murphy was not at his best for most of the campaign but his outstanding display in the final win over Mayo secured his award.

McFadden was nailed on to be named in the full-forward line after a brilliant season and will also battle out the player of the year honour with his team-mates Lacey and McGlynn at Friday's awards banquet.