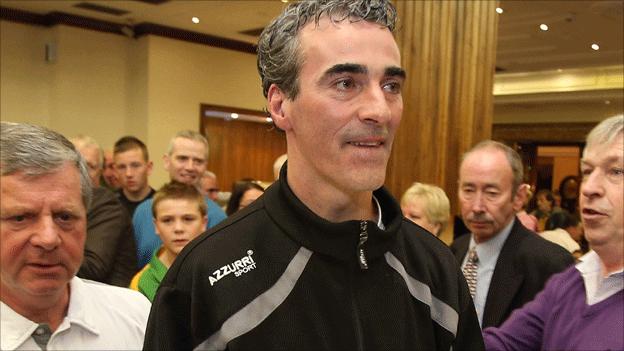 Donegal manager Jim McGuinness has indicated that Kevin Cassidy will not be invited to return to the All-Ireland champions' panel next season.

"That was in 2011 and now we are on the brink of 2013 - it's about looking forward at this stage and there's nothing left to be said on the matter.

"My beliefs and principles in terms of what went on remain," said McGuinness.

Former All Star Cassidy left the Donegal panel after revelations were made in a book last year.

In response to speculation linking him with potential roles at Liverpoool and Celtic Football Clubs, McGuinness said he had had "no contact with Liverpool".

"Celtic invited me over to a Champions League game and I saw round the training facilities, met the staff and had the chance to look at the sports science side of things which I'm extremely interested in.

"There were lots of things to pick up in terms of analysing matches.

"If I had the chance to go into professional sport it would be something I'd have to look at but my focus is on Donegal and I'm delighted with where we are at, although I want to move the thing forward."

Ulster GAA officials have yet to decide if Donegal's Ballybofey ground will be used to host the Ulster champions' 2013 Ulster SFC first round tie with Tyrone next year, but McGuinness is clear about his wishes.

"When you are drawn at home you feel entitled to home advantage and we deserve the right to run onto our own pitch as All-Ireland champions.

"We will wait for the decision but I hope it will be the right one for Donegal football and our supporters."