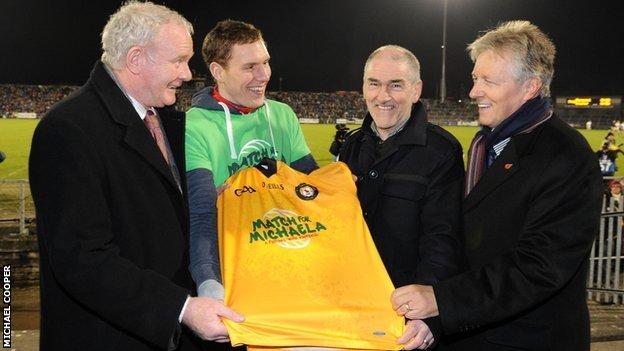 An Ulster Select team beat All-Ireland champions Donegal 2-12 to 1-12 in Saturday night's 'Match for Michaela', in memory of Michaela McAreavey.

Martin Pensrose and Darren Hughes scored Ulster's goals in front of a 20,000 crowd at Casement Park.

Teenager Patrick McBrearty netted for Donegal late in the match.

All proceeds are going to the Michaela Foundation, a charity set up in memory of the 27-year-old, who was murdered on honeymoon in Mauritius in January 2011.

First Minister Peter Robinson and deputy First Minister Martin McGuinness were among the famous faces in attendance at Casement Park.

Michaela's father Mickey and Joe Kernan managed the Ulster side.

It was Donegal's first appearance since winning the All-Ireland title at Croke Park in September and manager Jim McGuinness named his strongest possible XV.

Club commitments and injuries meant some of his players were unavailable but the starting line-up included nine of those who began the decider against Mayo.

Penrose's goal helped Ulster into a 1-6 to 0-4 lead at half-time and Hughes added the second before McBrearty struck with just seconds remaining.

Michaela's husband John McAreavey explained where the money raised from the game will go.

"As well as contributing to our growth plans for The Michaela Girls Camp into other counties, the proceeds from this major event will go directly into our fund for 'The Michaela Centre' which will be located in Tyrone and act as a hub for all our future activities."

Mickey Harte expressed thanks to the Ulster Council for "affording us this opportunity to remember Michaela in such as a special way".