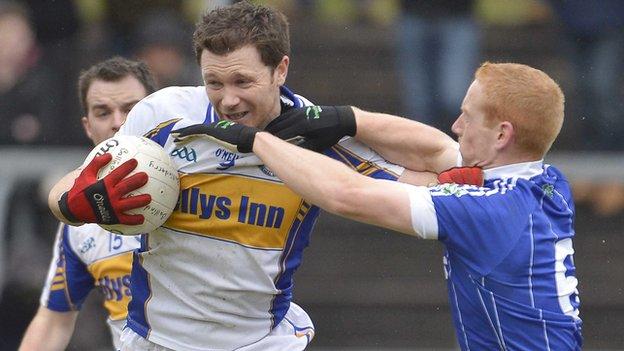 A close first half ended 0-5 to 0-5 before Tyrone champions Errigal fired over five points without reply.

Ballinderry's Conor Wilkinson and Damien McDermott of Errigal were sent-off midway through the second half.

Ballinderry fought back and Collie Devlin equalised before Canavan sent over the decisive point.

Canavan slotted over twice as Errigal established an early three-point lead but Collie Devlin's three points left the sides level at the break.

Errigal surged clear on the restart with Canavan and Brian Horisk each adding two points along with a score from Davy Harte.

It looked bleak for the Derry visitors when Wilkinson was dismissed for two yellows but numbers were soon level when McDermott was shown a straight red after an off-the-ball incident.

Back came Ballinderry with Dermot McGuckin (2), Kevin McGuckin and Enda Muldon slotting over before Devlin levelled with 90 seconds left.

Errigal had the final say as Canavan converted a free deep into injury time to clinch a dramatic win and a place in the last four.

Errigal will play the winners of next Sunday's quarter-final between All-Ireland champions Crossmaglen and St Eunan's.

St Eunan's progressed thanks to a 1-7 to 0-9 win over Naomh Connaill in Sunday's Donegal senior final at Ballybofey.

Leo McGonigle netted for St Eunan's although they finished with 14 men after David McGinley was sent-off.