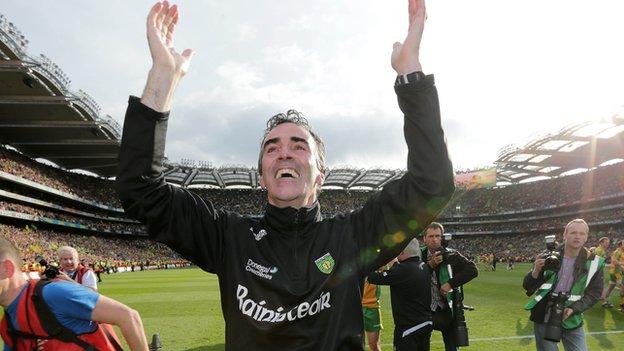 Donegal's All-Ireland winning Gaelic Football manager Jim McGuinness is to take up a role with Celtic as a performance consultant.

A statement from Celtic on Friday confirmed speculation that McGuinness would be joining the club to help with the development of young players.

McGuinness also revealed that he would be combining his Celtic role with his existing GAA job.

This was later confirmed by Donegal county board officials.

Donegal also expressed congratulations to McGuinness on his appointment to the Celtic role.

"It is a great opportunity for me in terms of my own development," said McGuinness.

"But it will also benefit Donegal because I will be learning new skills in a professional environment."

Celtic manager Neil Lennon said that McGuinness' appointment would have no effect on his role at Donegal.

"He will probably initially come in two days per week and we will take it from there," added Lennon.

Lennon also revealed that Celtic's majority shareholder Dermot Desmond was behind the recruitment of the Donegal GAA manager.

"Jim has a skill set that we don't have here, in terms of the psychological side of the game.

"He will player profile the younger players, look at their strengths and weaknesses, study their background and their state of mind.

"He will not be able to coach, he is not a qualified football coach but he does know sport and has excelled in his own sport.

"So the cross to football will not be a problem.

"He will predominantly work with younger players but if I feel there is a first-team player that would benefit from Jim's skill I would have no hesitation in using him."

McGuinness was quoted as describing his new job as a "fantastic opportunity".

"My role will be based on developing the younger players in the club, development and Academy players that are U20 and that level," McGuinness told Celtic's website.

McGuinness, who has a masters degree in sports psychology, was a guest of the Glasgow giants at Wednesday's Champions League win over Barcelona, having viewed the club's facilities in a previous visit.

The Glenties man will combine his Celtic role and the Donegal job with his assistant Rory Gallagher taking on increased responsibility.

McGuinness led Donegal to the All-Ireland title with a victory over Mayo in the final at Croke Park in September.

His achievement is leading a previously underachieving team to an All-Ireland title in two years has to be regarded as one of the most remarkable coaching feats in GAA history.

The manager's attention to detail led to a defensive playing system which led to widespread criticism in his first season in charge but the Donegal team employed a more attacking method this season as they clinched the county's second All-Ireland triumph.

McGuinness is only two years into a four-year contract with the county.