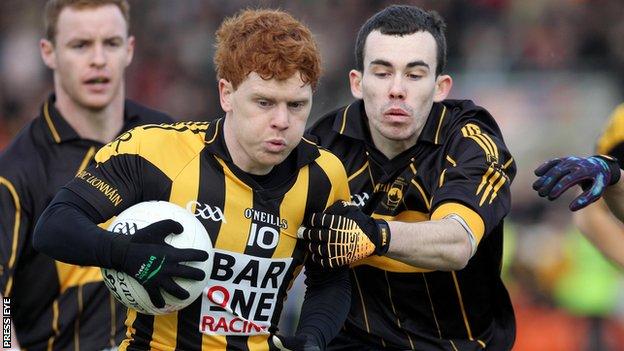 All-Ireland champions Crossmaglen eased past St Eunan's Letterkenny in the Ulster Club SFC clash without having to produce their best at Armagh.

However, Cross responded with five unanswered points before half-time to take firm control of the contest.

John Haran's goal gave Eunan's a glimmer of hope but they then had Mark McGowan sent off and Aaron Kernan and Paul Grant goals sealed the Cross win.

Crossmaglen went into the game boosted by the return to the panel of defender Danny O'Callaghan although he was not considered for Sunday's contest following his arrival home from Australia on Thursday.

Despite having Paul Kernan and Stephen Kernan both back in their line-up following injury, the champions made a slightly sluggish start as Eunan's created a couple of early scoring chances only to be undone by errant shooting.

Predictably Cross punished the misses in time-honoured fashion as brilliant work by the evergreen Oisin McConville and Aaron Kernan set up Carragher's opening goal to put the holders 1-1 to 0-1 ahead.

Eunan's responded by having their best spell of the match as scores from McGowan, Lee McMonagle and Ross Wherrity brought the sides level by the 15th minute.

At that stage of the contest, the Cross defence was looking shaky under the high ball while Conal Dunne was giving James Morgan quite a degree of trouble.

Cross were also having troubled breaching St Eunan's packed defence which appeared to be working from the Jim McGuinness manual.

However, St Eunan's lost their composure during the remainder of the first half as the concession of frees gifted Cross two points with the Letterkenny side also appearing to make the mistake of attempting to mix it in the physical stakes with the battle-hardened All-Ireland champions.

McConville and Aaron Kernan points edged Cross two ahead by the 18th minute and possibly the key moment of the match then came when Eunan's Caolan Ward blazed wide a glorious goal chance when he only had Paul Hearty to beat.

A period of scuffles both on the field and the dug-out areas was then followed by three further Cross scores before the break.

The outstanding David McKenna responded to his booking following his tussle with Haran by lofting over a glorious point with McConville and corner-back Paul Hughes added the other scores before half-time.

Haran's goal shortly after the restart left a kick of the ball between the sides as he outmuscled Paul Kernan to win a long ball before blasting past Hearty.

But the goal proved a false dawn for the Donegal champions as McConville and McKenna immediately responded with Crossmaglen points.

The game was truly up for Eunan's when McGowan's sending off after an off-the-ball incident was quickly followed by Aaron Kernan's goal after an early ball by his brother Stephen had been flicked on by McConville.

With the game won, Cross were able to withdraw McKenna and Aaron Kernan ahead of next Sunday's semi-final clash with Errigal Ciaran with both players appearing to be nursing minor knocks.

Grant's goal put the seal on Cross' victory as Eunan's summoned up little resistance in the closing stages.