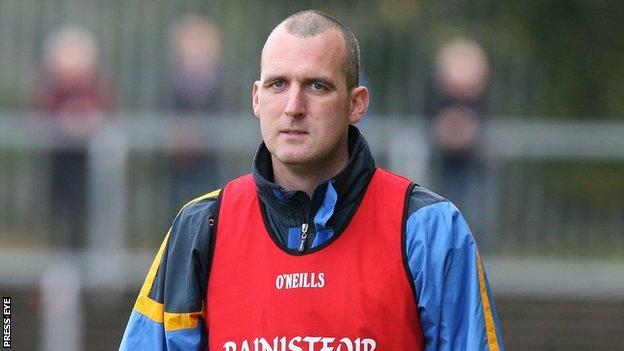 Errigal Ciaran manager Ronan McGuckin admits his side faces a "huge challenge" as they prepare to take on Crossmaglen in Sunday's Ulster Club Football semi-final at Clones.

"Errigal are a very young team who are learning all the time," said McGuckin.

"This will provide a good barometer of where we are at against the kingpins of club football in Ulster and Ireland."

In the day's other semi-final Antrim champions St Gall's will play Kilcoo of Down at The Athletic Grounds in Armagh.

Errigal boss McGuckin will be without Damien McDermott and Caolan Tierney.

McDermott is suspended following his straight red card in the win over Ballinderry while other forward Tierney is on a three-week holiday abroad.

"Caolan agonised over it, it was something he had booked over a year ago," said manager McGuckin.

"I wasn't going to put a block in his way and he has decided to go."

However despite the absence of the two attackers, McGuckin remains optimistic that he has a strong enough panel at his disposal to overcome the setbacks.

"Two players off your first 15, no matter where they are on the field, are hard to replace.

"But we would consider that we have a fairly strong panel and we would hope to be able to cope with that.

"Obviously, going in against Crossmaglen, you need to be right on top of your game, but I would have full faith in the fellows that will be coming in for them.

"We actually made the point before the Ulster Club campaign started that it is one competition that if you get a bit of a run in it, you can go through a fairly high turnover of players for a variety of reasons.

"So it was something that we had prepared for and expected to happen.

"What can we do? The die has been cast and we'll just go out and give it our best and see where it takes us."

McGuckin watched Ulster and All-Ireland champions Cross ease past St Eunan's 3-11 to 1-7 on Sunday and the Errigal boss described the performance as "very impressive".

The Ballinderry native will be back in the Errigal dugout this weekend after opting out of the win over his home club in the previous round because of a conflict of interest.