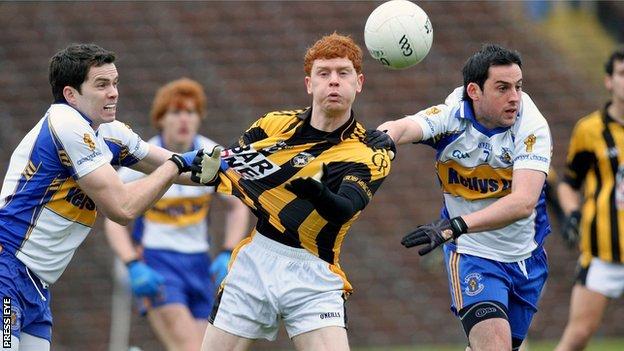 All-Ireland champions Crossmaglen overcame Errigal Ciaran in the Ulster semi-final thanks to a strong second-half display at Clones.

Jamie Clarke netted to bring Cross level after 20 minutes but Errigal led 0-8 to 1-4 at the break.

The holders took control on the restart with Oisin McConville firing over three points as Cross moved clear.

David McKenna scored the second goal on 54 minutes to end Errigal's hopes and send Cross into another Ulster decider.

Clarke hit the crossbar in the opening seconds before McConville put the first point on the scoreboard with a free.

Errigal hit back with scores from Darren Canavan and Thomas Canavan (2) and they moved three clear before Clarke's goal, with the forward cutting inside and firing into the net.

Clarke slotted over seconds later but late points from Ronan McRory and Darren Canavan gave Errigal the edge at half-time.

Four straight points on the restart put Cross in command and Johnny Hanratty wasted a goal chance for the champions before McKenna hit the net.

The goal moved Cross five ahead and they easily held on to set up a meeting with Down side Kilcoo in the 2 December final.

"We will take great confidence from this game going into the final," said Cross defender Aaron Kernan.

"However, I'm disappointed with our shot selection which made life harder for ourselves.

"We kept plugging away and creating chances although we know we have plenty of work to do."

Crossmaglen will play underdogs Kilcoo in the final at the Athletic Grounds, Armagh, on Sunuday, 2 December.