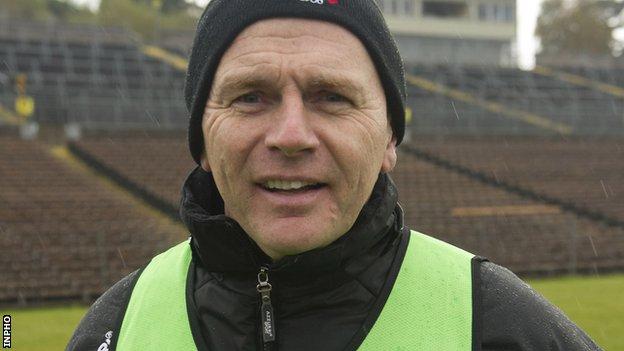 Kilcoo boss Jim McCorry says guiding his team to the Ulster club title on Sunday against Crossmaglen would be the "pinnacle" of his managerial career.

McCorry steered Armagh to the National Football League final in 1994 and also managed Mayobridge to an Ulster Club Final appearance in 2001.

But while his teams have landed county titles, provincial and national honours have so far eluded him.

"I would be so delighted for the players," McCorry told BBC Sport NI.

McCorry adds that the commitment displayed by his squad this year has been "total".

"What they have put in this year is second to none. Better preparation than a lot of county teams would you believe?

"No matter what they are asked to do, they do it."

This time last year, Kilcoo were preparing for a Down League Final and McCorry is delighted to see the team's progression over the last 12 months.

The former Armagh manager guided Kilcoo to the club's first Down title in 79 years in 2009 and his team went on to be narrowly beaten by Loup in the provincial semi-finals.

"We probably should have been in an Ulster final in 2009 and we have the experience of playing two more games this year in the competition.

"That experience all stands to the players. And it was great for the players to play against former All-Ireland champions St Gall's in this year's semi-final and beat them."

Kilcoo's win over the 2010 All-Ireland champions was something of a shock but McCorry insists that his players were "full value" for their success over the west Belfast club.

"When you break down that game into 10-minute phases, we were as good in every sector of the field.

"They probably had more scoring opportunities but those chances were missed because we forced them into making errors.

"We came strong in the last 10 minutes and for the four and a half minutes of injury-time. So that was the last 15 minutes that we virtually dominated."

And that was even though Kilcoo had been reduced to 14 players early in the second half following Niall McEvoy's dismissal.

"We pushed on towards the end when maybe they sat back with their extra man. You would have thought at the end that we had the extra man."

While McCorry says he and his players have "huge respect" for Crossmaglen, he insists that there will be no fear factor come Sunday.

"We have to take our game to Crossmaglen and not worry about their game.

"I think in the past a lot of teams have got sucked into Crossmaglen's style and tempo. We got to try and play to our strengths."