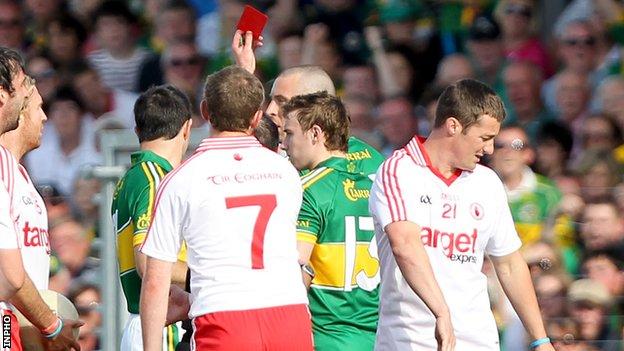 Brian McGuigan has acknowledged that his Tyrone career is probably over after he was unable to commit to the county squad for the 2013 season.

Writing in his Gaelic Life column, McGuigan revealed that manager Mickey Harte had asked him to attend recent trial matches.

"As fate would have it, I was sick for the two weeks the trials were taking place," said father-of-two McGuigan, who is now a pub landlord.

"That sort of made my mind up for me."

McGuigan added:"To expect to play for a team like Tyrone, you need to give it everything.

"Now, more than ever, you need to be out near enough every night of the week as well as recovery sessions and the likes.

"I simply couldn't do that and I rang Mickey last week and told him that was the case. He understood.

"I'm coming to the last of my years and to be able to compete against younger players, you have to be at a serious level of fitness.

"I knew I wasn't in a position to deliver that."

Ryan McMenamin announced his retirement from the Tyrone scene a number of weeks ago while a number of other experienced players have been left out of the Mickey Harte's provisional panel for 2013.

These include McGuigan, John Devine, Damien McCaul, Owen Mulligan, Davy Harte and Sean O'Neill although Tyrone sources have emphasised that the panel is a provisional list.

McGuigan retired from intercounty duty last November but was coaxed back during this year's Championship.

However, McGuigan's intercounty season ended on a sour note when he was sent off in the qualifier defeat by Kerry seconds after coming on as a sub.