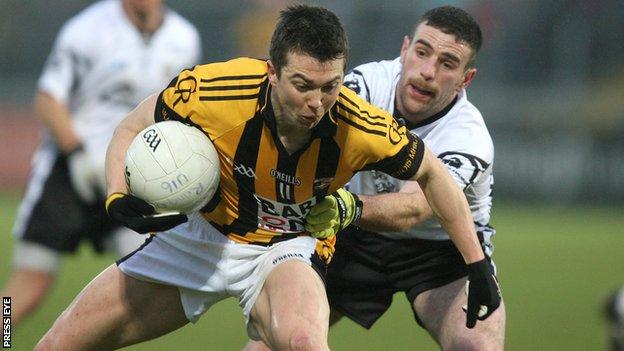 Crossmaglen finished with 13 men but they did enough to beat Kilcoo and secure a third straight Ulster title.

The All-Ireland champions made a superb start in Armagh with Oisin McConville's penalty and Aaron Kernan goal helping them to a 2-6 to 0-3 lead at half-time.

Kilcoo hit back on the restart and Anthony Devlin netted as the gap was reduced to three points before Cross had Michael McNamee sent-off.

Cross justified their favourites tag in the opening 17 minutes as they surged into an 11-point lead.

McConville converted a fourth minute penalty after Stephen Kernan was tripped by Gerard McEvoy as he ran through on goal.

However, Cross relaxed on their big lead and Kilcoo scored the last two points of the half through Darragh O'Hanlon and Paul Devlin.

Aaron Kernan fired over the opening point of the second half before Kilcoo took a grip of affairs with three points without reply.

And the comeback was definitely on when Anthony Devlin kicked low into the net on 41 minutes.

That was the high point for Kilcoo as Cross held their nerve and points from Martin Ahern and McConville halted the comeback.

Cross forward Clarke, who had a quiet game, was sent-off after picking up a second yellow card a minute from time,

Brennan sealed victory in the final seconds of normal time with an easy fisted finish from McConville's pass after Kilcoo lost possession.

Cross made hard work of securing a six-point win but they now look forward to an All-Ireland semi-final against St Brigid's.

"From the 17th minute we stopped playing and we were lucky in the end," said Crossmaglen's Stephen Kernan.

"Thankfully we got the scores in the last 10 minutes and we'll enjoy Christmas and look forward to the semi-final."

"They blitzed us in the first half - they are a classy side and were worthy winners," he said.

"We took the game to them in the second half but the damage was done and the goals killed us in the end."