A county Down man whose commitment and dedication in the face of adversity have helped transform his local football club and inspired a new generation of players has been named as BBC Northern Ireland's Sports Unsung Hero for 2012.

Leonard Blakely, a dedicated stalwart of Moneyslane FC near Rathfriland, lost a limb a decade ago in a work accident, forcing him to quit playing Intermediate League football.

Following the accident he dedicated himself to training and coaching children from the local area.

Under his guidance the club has grown from having one team to having seven junior boys teams, two senior teams and one ladies team.

Within the club he has several roles including co-ordinator for junior football, media officer and child welfare officer.

He oversees some 200 plus training sessions in a year and spearheads fundraising campaigns, recently raising £60,000 for the development of a 3G training pitch.

Now in its tenth year, the BBC Sports Unsung Hero Award recognises and rewards outstanding contribution by individuals at the grassroots level of local sport, who give up their time on a voluntary basis so that sport can be played and enjoyed by people throughout the UK. 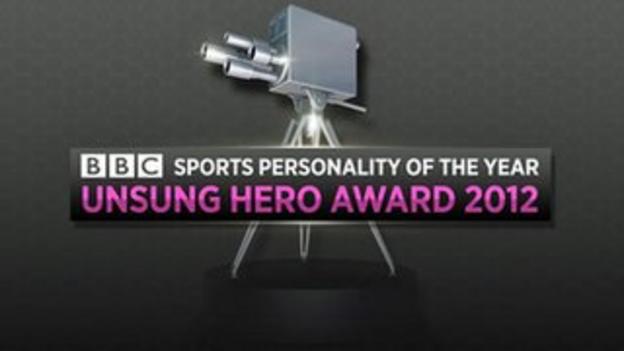 Leonard now progresses to the Unsung Hero final as the regional winner for Northern Ireland.

He said: "I was delighted and honoured to receive BBC NI's Unsung Hero Award for 2012. It was a total surprise as my daughter sent in the application behind my back.

"I accept the award not only for myself but in recognition of the many hours put in by all the staff of Moneyslane FC who provide the opportunity for members of the community, from children under the age of six through to adults, to participate in and enjoy a sport that they love.

"It will be a great honour to represent our club at the main awards night later this month."

Unsung Heroes from the Scotland, Wales, Northern Ireland and 12 English Regions will attend the prestigious BBC Sports Personality of the Year in London on 16 December, where an overall Unsung Hero winner will be announced.

This year's programme will be live at 19:30 GMT on BBC One and BBC One HD and will also be broadcast on BBC Radio 5 live.

Shane Glynn, Sports Editor, BBC Northern Ireland, said: "Leonard has been an inspiration to so many people in Moneyslane and is a very worthy winner of BBC Sports Unsung Hero title in Northern Ireland.

"As in previous years, it has been difficult to pick a winner from those who were nominated - there are so many people here who make such a valuable contribution to their sport and to their area.

"Thanks to all who nominated their Unsung Heroes. Leonard has given a lot to football in his local area and we wish him all the best at the overall awards in December."