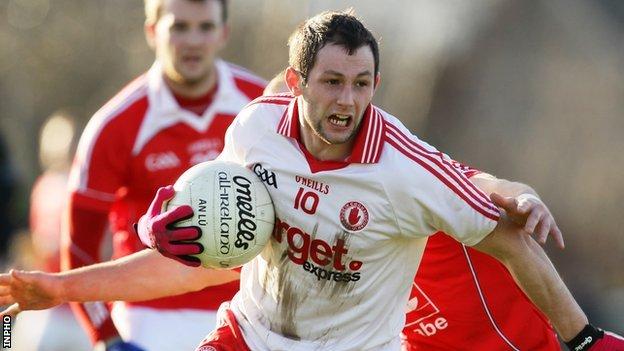 Ronan McNabb has been ruled out of Tyrone's Dr McKenna Cup campaign after undergoing surgery on a hip problem.

McNabb, who nailed down a regular place in the half-forward line last season, is also set to miss the opening stages of the National Football League.

Two of the 12 newcomers called up by Mickey Harte are also sidelined for the early part of the season.

Ciaran McGinley of Errigal Ciaran broke a toe while training Omagh's and Conan Grugan has a knee injury.

McGinley may need an operation to correct the problem while Grugan has damaged knee medial ligaments,

In addition to being denied his senior debut in the McKenna Cup, Grugan is also set to miss the early rounds of the National League.

McNabb is not expected back in action until March, and will not be involved in the Red Hands' return to Division One of the NFL in the Ulster derby against Down on 2 February.

The versatile Dromore man will also sit out the second game against Mayo a week later, but could be in contention for a return when Tyrone host All-Ireland champions Donegal at Healy Park on 3 March.

Ronan O'Neill, who missed most of last season with a cruciate ligament injury, is not due back until March

Kyle Coney, the team's top scorer in the 2012 NFL,, is set to boost the attacking effort by making his comeback.

Coney missed the championship campaign after suffering a serious groin injury in a club game which required surgery.

McKenna holders Tyrone take on Derry in a repeat of the 2012 final at Healy Park next Sunday.