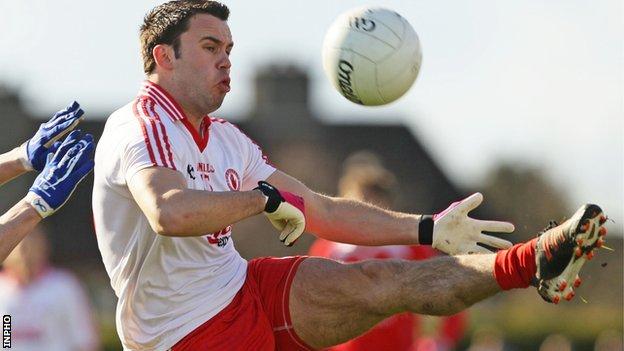 Coney picked up the injury in training this week and is a doubt for the remainder of the competition.

It is the latest injury setback for the holders with Ronan McNabb and Colm Cavanagh among the players ruled out of the McKenna campaign.

Elsewhere, Down start against Cavan with Antrim up against UUJ and Monaghan face St Mary's at Clones.

Midfielder Cavanagh is sidelined after sustaining a wrist fracture in an innocuous challenge while playing football at home.

An initial X-ray showed no damage but a subsequent MRI scan confirmed the injury.

Cavanagh was one of the stars of last year's McKenna Cup run, although he sustained cracked ribs in the final win over Derry which ruled him out of the start of the National League campaign.

His midfield partner Mickey Murphy will also be unavailable as he is currently on a month-long holiday in Australia.

Forward McNabb is recovering after surgery on a hip problem while Ciaran McGinley (toe) and Conan Grugan (knee) are also McKenna Cup absentees.

Paul McComiskey is in line to make his first Down appearance since the 2011 All-Ireland qualifier defeat against Cork in the game against Cavan at Breffni Park.

Danny Hughes and Ambrose Rogers are unlikely to feature as they recover from minor knocks but Kevin McKernan and Conor Laverty could line out.

Cian Mackey has returned to the Cavan panel while newcomers Killian Brady and Michael Brady may feature.

St Mary's are minus several players who will be in action for their counties in the competition.

With Antrim minus several players including James Loughrey, Aodhan Gallagher and the McGourty brothers, new manager Frank Dawson is expected to start Paul Doherty and Tony Scullion against UUJ.

The Poly have already been ravaged by the withdrawal of several of their county-tied contingent and to make matters worse will now be without Chrissy McKaigue (tonsils) and Paul Devlin (ankle).