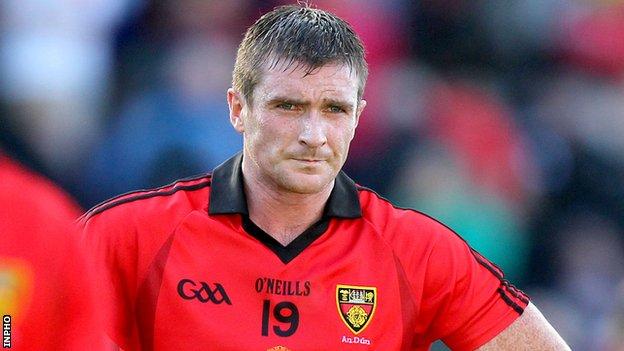 Three late points from substitute Liam Doyle helped Down edge out a wasteful Cavan side in the McKenna Cup clash.

Paul McComiskey's early goal helped Down move into a 1-4 to 0-1 lead but Martin Dunne's five points contributed to Cavan levelling by half-time.

Cavan then moved into a two-point lead before two Benny Coulter points helped Down draw level at Breffni Park.

Doyle was sent on midway through the second half along with All-Star nominee Conor Laverty and the duo's class proved decisive for Down in the closing stages.

Dunne hit nine of Cavan's points with their other three scores coming from midfielder McKiernan.

McComiskey, playing his first game for Down since the 2011 All-Ireland qualifier defeat by Cork, hit the net with the opening score of the game and a Ryan Boyle score extended the Mourne County's advantage to four points.

However, three straight Dunne points left a kick of the ball between the sides and Cavan continued to dominate the remainder of the first period as they drew level at 0-8 to 1-5 by the break.

Cavan moved into a two-point advantage after half-time before two points by first-half substitute Coulter brought the sides level.

John McCutcheon's switch to centre-field saw Cavan take a stranglehold on procession midway through the second half but Terry Hyland's side failed to make their dominance count as they missed a series of chances.

In contrast, there was an economy of effort about Down's scores after the introduction of Doyle and Laverty.

Doyle rattled off three straight points to put Down two ahead and James McCartan's side stayed ahead until the finish.