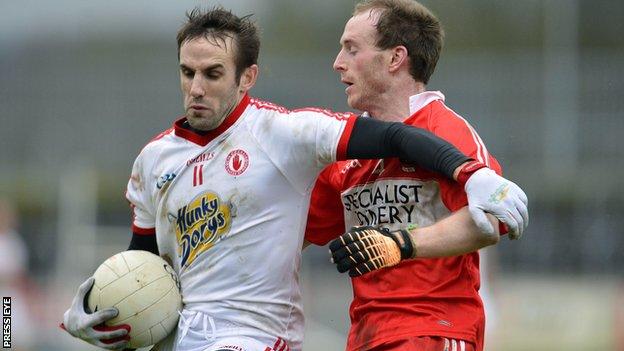 Both Mickey Harte and Brian McIver have rung the changes for their team's McKenna Cup games this weekend.

Only Niall Morgan, Conor Gormley, Sean Cavanagh and Stephen O'Neill remain in the Tyrone team for Sunday's Section A game against Antrim at Casement.

Lynch will captain the team from centre half-back while the side also includes PJ McCloskey and Enda Lynn.

The Oak Leafers are minus trio Declan Brown, Patsy Bradley and Barry McGoldrick.

Brown will miss the remainder of the competition after bruising a kidney in last Sunday's last-gasp defeat by Tyrone.

John Carron and Colm Fleming are handed their first Antrim starts after coming on as substitutes in last weekend's win over UUJ while Paul Doherty moves from midfield to full-back.

An interesting inclusion is Crossmaglen's Stephen Finnegan who has apparently been dropped by his club managers Tony McEntee and Gareth O'Neill.

However, Finnegan will start at corner-back on Saturday while other debutants include Mark Shields, Stephen Harold, Niall McConville and the highly-rated Ethan Rafferty.

Martin Dunne again starts for Cavan after his impressive nine-point haul in last weekend's opening defeat by Down.

Monaghan boss Malachy O'Rourke hands debuts to Owen Coyle and Keith McEnaney while Donal Hahessy gets his first start after coming on as a substitute in last weekend's win over St Mary's.