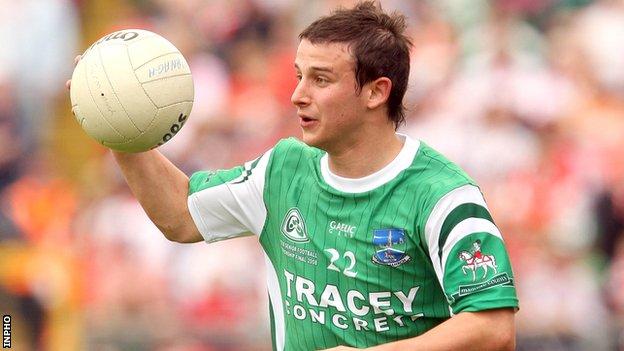 First-half goals from Shane McCabe and Paul Ward helped Fermanagh to a 2-15 to 1-5 victory over St Mary's - their second McKenna Cup win in five days.

Fermanagh were 2-7 to 1-2 up at half-time after former Glentoran player McCabe found the net after half an hour and Ward quickly added a second.

Peter Canavan's side had far too much firepower for St Mary's who led briefly through Brian Doyle's 20th-minute goal.

The students only hit three points in the second half.

Fermanagh pulled away to secure the 13-point success, with Daryl Keenan hitting 0-3 from play.

The Erne county had seven different players on the scoresheet, with the entire full-forward line scoring from play.

Paul Ward (2-4) and Daryl Keenan (0-5) were influential against the struggling students.

On Wednesday, Fermanagh had opened their McKenna campaign with a win over a depleted Donegal side.

Fermanagh now face a winner-takes-all clash against Monaghan in Inniskeen on Wednesday night to decide who qualifies for the semi-finals.