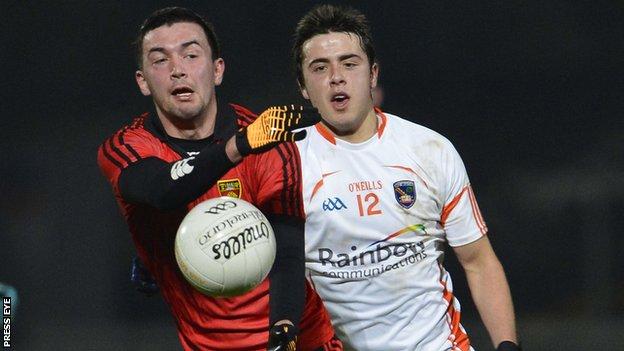 Goals in each half from Kevin McKernan and Paul McComiskey earned Down a 2-11 to 1-10 win over Armagh and a McKenna Cup semi-final meeting with Monaghan.

Down led by 1-7 to 0-4 at half-time, with McComiskey scoring three points from play inside the first 12 minutes.

Forker staked a claim for a regular place in Armagh's full-forward line with four points from play.

In front of 2,529 in Pairc Esler, Kevin McKernan scored the opening goal after 20 minutes.

McComiskey's attempt at a point dropped short and Connaire Harrison jumped to contest the high ball with the goalkeeper, knocking it down into McKernan's path.

While Armagh laboured and dwelled too long on the ball, Down moved the ball quickly and with purpose.

Michael Stevenson and Stefan Forker chipped over points but Armagh still trailed 1-7 to 0-4 at the break.

Armagh scored four unanswered points in the first five minutes after the restart.

A long-range effort from Ciaran McKeever and two sweet points off either foot from Forker closed the gap to two points.

McComiskey converted a free to stop Armagh's run of scores and any hope of an Armagh fightback was extinguished by Down's second goal after 46 minutes by the same player.

Down were not as slick in the second half but the goal was well worked, Benny Coulter's surging run through the middle and unselfish pass setting up the chance to seal victory for the home side.