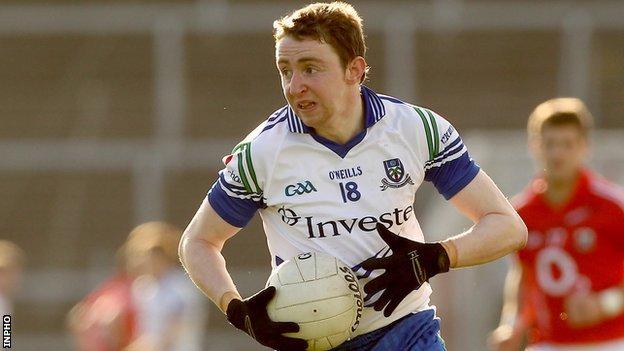 Monaghan beat Fermanagh 1-12 to 0-07 in Wednesday's clash between Section A's unbeaten teams - but both are into the McKenna Cup semi-finals.

Owen Duffy scored four points in the first half as Monaghan carved out a handy 0-5 to 0-2 lead by the break.

Paul Ward, who got Fermanagh's early scores, landed another couple to cut the deficit to one.

Monaghan pulled away to make it three wins from three with a string of points and a late goal by Dermot Malone.

Malachy O'Rourke's men finished as group winners and now face Section B winners Down in the semi-finals on Sunday, 20 January.

Fermanagh qualified as best runners-up and will play Tyrone.

Meanwhile, Donegal finished their cup campaign with their first win - a narrow 1-14 to 2-10 success over St Mary's.

The All-Ireland champions again fielded an experimental team , with 11 under-21 players starting at Ballybofey.

Odhran Mac Niallias scored an early goal for Donegal and also landed three points in the first half.

But he was outscored in the first period by Brendon Herron, the Antrim man netting a goal and four points for the Ranch.

It was a goal by Down's Ronan Sexton, followed by Herron's fourth point, which gave St Mary's a slender 2-05 to 1-07 interval advantage.

Back came St Mary's who held a one-point lead going into the closing stages.

However, Ross Wherity levelled for the home side and then Gibbons landed a free to secure the Donegal win.