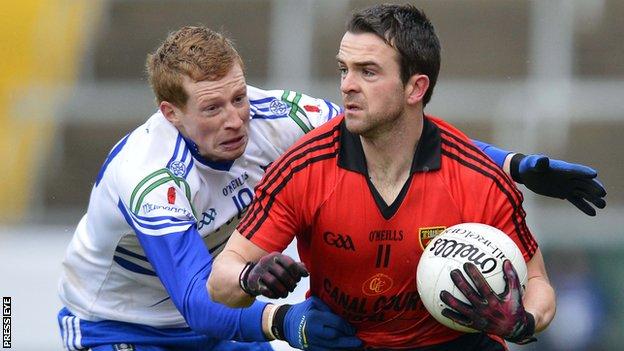 Monaghan edged out Down 1-12 to 0-13 in Sunday's opening Dr McKenna Cup semi-final at the Athletic Grounds.

Down led 0-5 to 0-2 midway through the first half but a Conor McManus goal helped Monaghan level by half-time.

The Mournemen led by a point on four occasions in the second half but two huge injury-time points from Darren Hughes helped Monaghan edge the win.

Down's Keith Quinn and Monaghan's Karl O'Connell were sent off in the second half after getting two yellow cards.

Quinn was dismissed after 50 minutes after getting his second yellow card in the incident which led to O'Connell receiving his initial booking.

O'Connell then received his marching orders five minutes from time.

Down moved into an early two-point lead after scores from Connaire Harrison and Donal O'Hare.

However, Monaghan took the lead after McManus' third point was followed by his well take goal.

Unanswered points from O'Hare, the impressive Arthur McConville and Poland saw Down moving two ahead again but points from Owen Duffy and McManus saw the teams going in level at 0-8 to 1-5 at the interval.

McManus nudged Monaghan ahead after the restart but Down responded to take the lead thanks to a fisted Ryan Mallon point and Poland's third score.

Down moved into a single-point advantage on three occasions during the remainder of the contest only for Monaghan to draw level each time.

The Mournemen led as late as the 67th minute after a Danny Savage point but McManus brought his tally up to 1-7 with a levelling score and the two thumping injury-time points from Hughes settled the outcome.