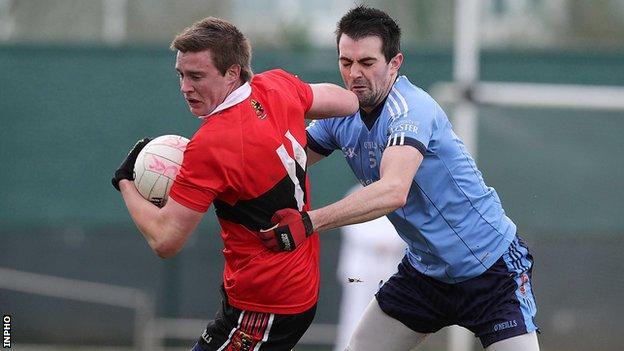 UUJ are out of the Sigerson Cup after losing their first-round game but St Mary's University College have progressed to the quarter-finals.

There was no way back for Jordanstown at Parnell's in Dublin as UCC hit an opening unanswered 1-11 and eventually clinched a 1-14 to 0-9 victory.

UCC played with a big wind advantage in the first half and led 1-13 to 0-2 at half-time.

The Ranch fought back from 0-4 to 0-2 in arrears early on to set up a last eight tie with UCC.

St Mary's took control by half-time as five unanswered scores moved them into a 0-7 to 0-4 lead.

Paddy Tally's side continued to boss the contest and Harte's late goal rounded off a comfortable win.

Aided by the gale, UUJ dominated the second half but missed chances in the third quarter meant that any slim hopes of a remarkable comeback quickly evaporated.

Paul Devlin top-scored with 0-5 for Adrian McGuckin's side with Emmet McGuckian also among their scorers.

Queen's were not in action but now know their first-round opposition after holders DCU defeated UL 1-14 to 0-8 in the preliminary round on Tuesday.

In Tuesday's other first-round game, Athlone IT defeated IT Carlow 1-13 to 0-6.

The quarter-finals are scheduled for 13/14 February with the finals weekend taking place in Athlone on 22/23 February.