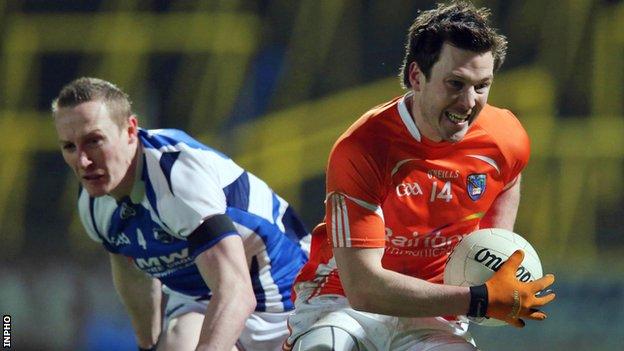 A topsy turvy contest saw Armagh outscore Laois 1-5 to 0-1 after half-time only for the home team to hit six of the last seven scores at Portlaoise.

Goalscorer Brian Mallon and Ethan Rafferty were the pick for Armagh.

Manager Paul Grimley had opted to give some of his younger players a chance to shine in the league opener.

He selected an inexperienced full-back line of Mark Shields, James Donnelly and Gary McCooey while left half-forward Ethan Rafferty also made his league debut after impressing in the McKenna Cup campaign.

Rafferty, Gavin McParland and Stefan Forker scored Armagh's early points but Laois were ahead by the 14th minute after scores from Ross Munnelly, Darren Strong and Donie Kingston.

By that stage, Brendan Quigley and Colm Begley were beginning to dominate the midfield sector and Laois went on to hit nine unanswered points before the break with Padraig Clancy, Billy Sheehan, Conor Boyle and Colin Kelly also among the scorers.

It could have been even worse for Armagh by half-time as full-back James Donnelly blocked a goal-bound effort by Clancy and keeper Philip McAvoy also made a great save to deny a Quigley goal.

Munnelly scored the first point of the second period before Armagh hit 1-5 without reply as Laois lost their way.

But just as the most unlikely of comebacks briefly looked on, the Armagh revival suddenly evaporated as Munnelly and Sheehan again took the game by the scruff of the neck by both bringing up their points tally to six.

Armagh may have been without their Crossmaglen contingent but this was not a particularly encouraging beginning to Grimley's attempts to overhaul the Orchard squad.