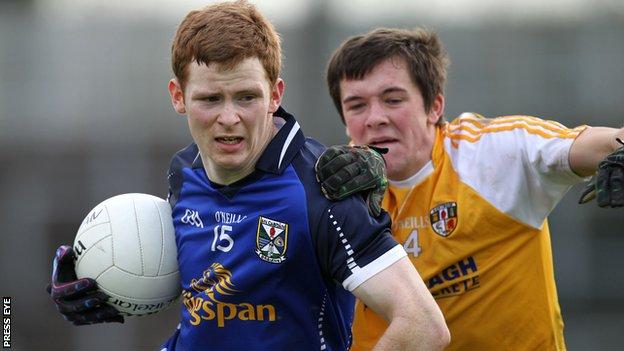 Antrim produced a battling display to hold off Cavan in the Football League Division 3 opener at Casement Park.

Mark McKeever's 15th-minute goal put Cavan three points ahead but the Saffrons rallied to trail by only one at the interval.

Cavan moved three ahead but Antrim fought back by scoring an unanswered 1-5 including a Michael Pollock goal.

Martin Dunne responded with a Cavan goal from a penalty but the Saffrons held their nerve to win.

Antrim's Sean McVeigh was shown a straight red card in injury-time after tussling with a Cavan player but that took little gloss off a successful opening League game for new manager Frank Dawson.

The Murray brothers Conor and Ryan both starred for Antrim as they contributed four and three points respectively while Michael McCann shone in midfield for the Saffrons.

Dunne nudged Cavan ahead twice in the opening 14 minutes only for the impressive Conor Murray and Kevin Niblock to level on both occasions.

McKeever burst through to hammer in Cavan's first goal in the 15th minute and while McVeigh and Ryan Murray responded with Antrim points, the Breffnimen were three ahead again when McKeever and Dunne notched further scores.

Points from Pollock, Michael Herron and Ryan Murray restored parity once more only for David Givney to nudge Cavan ahead just before the break.

Cavan looked in a degree of control when Thomas Corr and Gearoid McKiernan added further Breffni scores after the resumption.

But a point from Justin Crozier and two Conor Murray efforts levelled the contest again and it was to get even better for the Saffrons.

More points from Pollock and Conor Murray were followed by Pollock's crucial goal after great work by Michael Herron.

Cavan were back in the contest within a minute as Dunne drilled home a penalty blatantly conceded by Antrim keeper Chris Kerr for a foul on Cian Mackey.

However, the Breffnimen were unable to get on terms in the closing stages as their two concluding scores were cancelled out by points from Brendan Herron and Ryan Murray.