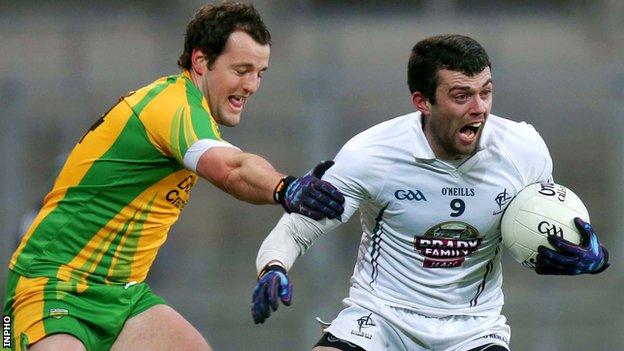 The impressive Michael Murphy finished with nine points for Donegal but still didn't pick up the man of the match award which deservedly went to Kildare forward Niall Kelly.

Paddy McGrath was a late withdrawal from the Donegal team while injury-hit Mark McHugh also dropped to the bench.

However, the All-Ireland champions made the better start with Michael Murphy's two opening points followed by a Paddy McBrearty score.

But Donegal then suffered a blow when All-Star Colm McFadden was forced off with a suspected hamstring strain.

Johnny Doyle opened Kildare's account in the 11th minute and Kildare were suddenly 1-2 to 0-3 ahead as full-forward O'Connor fisted to the net after a Michael Conway free had come back off an upright.

Further Doyle and Niall Kelly points extended Kildare's advantage to four before Murphy got Donegal scoring again in the 27th minute as he fired over the bar when the net seemed likely to bulge after he had fielded a long ball.

But with Donegal looking ragged, Kildare were able to extend their advantage to 1-7 to 0-5 by half-time.

Kelly was having a tremendous game for Kildare and was on the score-sheet again as the Lilywhites pushed on to lead 1-10 to 0-6 early in the second half.

Murphy attempted to rally Donegal with a couple of superb efforts from play and four points in as many minutes from Patrick McBrearty, substitute McHugh, Eamonn McGee and Molloy suddenly left the minimum between the teams by the 59th minute.

But that was as good as it got for Donegal as Michael Conway doubled Kildare's lead with a 63rd-minute free before Durcan's bad mistake gifted Kildare their second goal as he allowed Doyle's high ball from 30 metres to slip through his grasp and into the net.

Molloy responded by scrambling in Donegal's goal within a minute after good work by Ross Wherity but Kildare hit three of the last four scores in the last five minutes of play as the All-Ireland champions appeared to run out of puff.