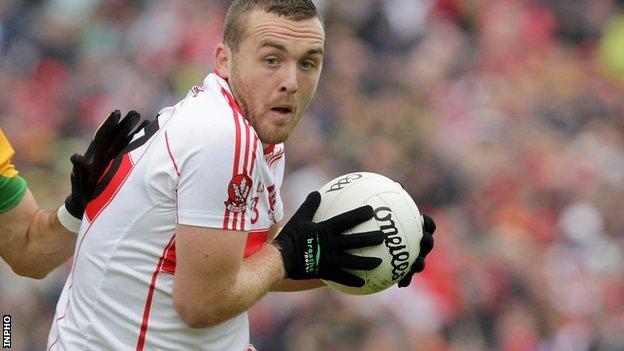 Derry earned a first win in their Division Two campaign with a comeback victory over Laois at Celtic Park.

Derry's strong start was halted when Ross Munnelly netted and Damien O'Connor scored another Laois goal to make it 2-7 to 0-9 at half-time.

Derry fired over the first three points on the restart and they moved ahead after Emmett McGuckin's goal.

Derry's James Kielt was sent-off for two yellow cards but the hosts held firm to secure the points.

Eoin Bradley, JP McCloskey, Ryan Ferris and McGuckin slotted over as Derry moved into a two-point lead on a heavy Celtic Park surface.

We gifted them two goals but we dug in, showed character and deservedly won it

Munnelly scored two points before a poor pass from Mark Lynch let him in to net the opening goal.

O'Connor fired past Derry keeper Thomas Mallon late in the half to give Laois a four-point lead at the break.

Derry fought back with quick points from McGuckin (2) and Ferris to signal a second-half fightback.

The decisive score came when McGuckin fisted into the Laois net and it was quickly followed by a Bradley point.

Kielt added a point before his dismissal and a superb Lynch score helped Derry to a hard-fought win.

"It was a great game of football, the players put their bodies on the line and it was a big result for Derry," said Oak Leaf boss Brian McIver.

"The match was played in very heavy conditions and were up against a very strong Laois team.

"We gifted them two goals but we dug in, showed character and deservedly won it."