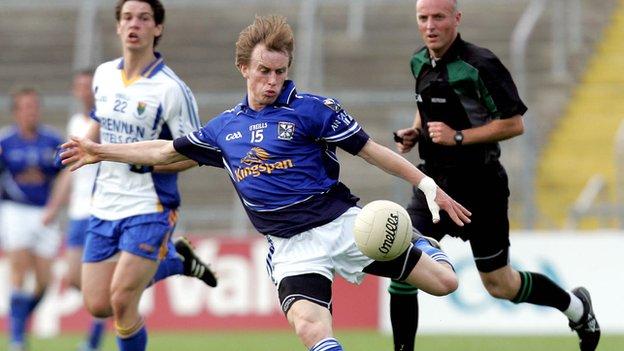 Cavan beat Monaghan in an ill-tempered Division Three derby marred by the dismissal of five players.

Monaghan forward Conor McManus was red-carded by referee Barry Cassidy and Cavan's Martin Dunne was next to go.

The loss of McManus gave Cavan the edge and they held a 0-7 to 0-1 half-time lead before being reduced to 13 men with John McCutcheon's dismissal.

Martin Reilly scored a penalty before Monaghan pair Davin Doogan and Dessie Mone were sent off late on.

McManus was sent off for the first time in his career on 12 minutes and fellow forward Dunne followed six minutes later - both were shown straight reds after off-the-ball incidents.

Cavan fared better with 14 men and Alan Clarke, Mark McKeever and David Givney were among the scorers as they went in six points ahead.

McCutcheon was red-carded for a high tackle on Darren Hughes two minutes after the restart but Cavan tagged on another score through Jack Brady.

Monaghan were boosted by the introduction of forward Thomas Freeman and he slotted over before Dick Clerkin reduced the gap to five.

Cavan pulled clear again and the victory was sealed with Reilly's penalty after a foul on Givney.