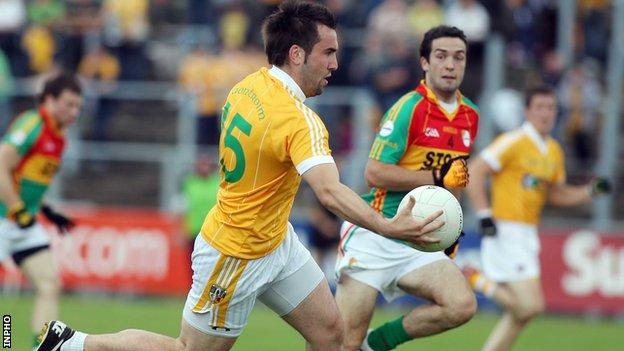 Antrim finished with 13 players as they suffered a narrow Division Three defeat against Sligo at Markievicz Park.

The Saffrons held an early lead before Sligo took control and a Pat Hughes goal helped the hosts to a 1-8 to 0-4 advantage at the break.

Antrim sent over five unanswered points at the start of the second half and the gap was reduced to just two points.

Kevin Niblock was sent-off before Michael Magill's late dismissal as Sligo held on for a two-point victory.

Points from Ryan Murray and his brother Conor gave the visitors an early advantage but Sligo moved ahead before Niblock sent over a long-range point.

There was just three points between the sides before Sligo hit 1-3 without reply, including the goal from Hughes.

Antrim's shots were falling short in the first half but they had little difficulty making the distance after the interval.

Paddy Cunningham (2), Conor Murray (2) and Michael Pollock slotted over and Antrim were back in the game.

Niblock was dismissed for two yellows but the game remain close and Antrim defender Justin Crozier fired over instead of going for goal with 10 minutes.

Substitute Magill was shown a straight red in the dying minutes after an off-the-ball incident.