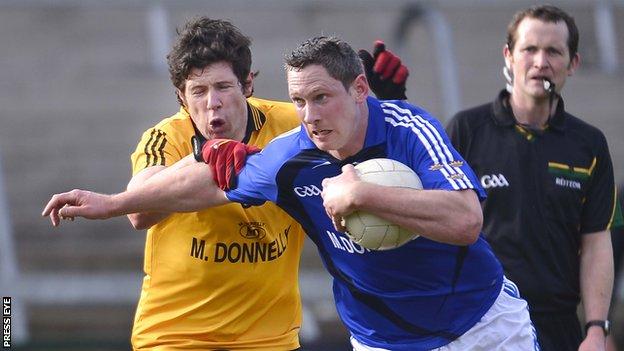 Joe Kernan's Ulster survived a stirring second-half comeback by Munster to edge a one-point win in the Interprovincial Football semi-final at Armagh.

However, Munster hit an unanswered 1-6 after the restart helped by Donnacha O'Connor's penalty.

The win set up a decider against Leinster next weekend after they defeated Connacht 1-21 to 1-20 in Sunday's other semi-final.

With a crowd of 1,615 watching, Sean Cavanagh opened Ulster's account after only 20 seconds and with Conor McManus also among the early scorers, the home province looked in firm control as Penrose blasted in a ninth-minute goal to put them 1-3 to 0-1 ahead.

Ulster continued to dominate with Cavanagh (two), McManus and Givney among the scorers as they pushed their advantage to 1-11 to 0-6 by the interval.

However, Munster sensed the possibility of an unlikely comeback when Donnacha O'Connor blasted in a penalty in the first score after the restart.

By that stage, Givney had been sent off after getting his second yellow card which came as Ulster's lead had been trimmed to two points.

However, McKeever stopped the rot with a superb point from play and he repeated the dose with another tremendous score to restore Ulster's lead.

Another Cavanagh point gave Ulster some crucial breathing space and they needed it as Aidan O'Mahony quickly reduced the margin to the minimum.

Indeed, Munster had chances to force extra-time or perhaps even steal snatch victory as Colm O'Neill hit an upright and then saw a last-gasp effort in injury-time sailing just wide.