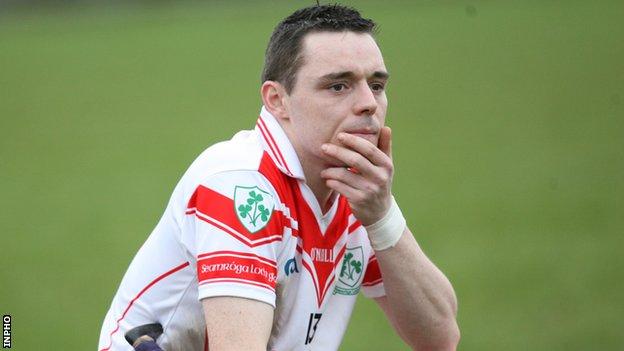 Loughgiel surrendered their All-Ireland Club Hurling title with something of a whimper as they were well beaten by St Thomas in the semi-final replay.

The key period at Clones was early on as Benny McCarry, Shay Casey and Liam Watson missed Loughgiel goal chances.

St Thomas showed greater accuracy to lead 0-5 to 0-2 although Loughgiel trimmed the margin to one by the break.

Liam Watson's free after the restart had levelled the contest at 0-6 to 0-6 but the Galway side responded with eight straight points with Conor Cooney and the outstanding Burke both contributing three points.

Richie Murray had been completely ineffective at full-forward in the first half but he looked a different player after being moved to centre half-forward after the interval.

Loughgiel will look back on the missed goal chances in the early stages of the contest.

McCarry blasted wide early and Casey then had his chance brilliantly blocked after a superb bit of fielding by McCarry.

Watson then flashed his goal opportunity wide on one of the few occasions during the hour when he managed to shake off his outstanding marker Sean Skehill.

A Watson point did level the contest at 0-2 apiece but scores by brothers Kenneth and David Burke helped the Connacht champions move into a 0-5 to 0-2 advantage.

Loughgiel responded with three of their remaining four scores before the break with Eddie McCloskey finally notching their first point from play in first-half injury-time.

The holders levelled the contest after the resumption following Watson's fifth free and he was then presented with a sniff of a goal chance only for his control to let him down at the crucial moment.

The remainder of the contest was dominated by the young and energetic St Thomas outfit.

The outstanding Bernard Burke took the game by the scruff of the neck as he slotted three points from play.

Cooney went into overdrive with three points with Murray finally proving a handful for the Loughgiel defence after his move to centre half-forward.