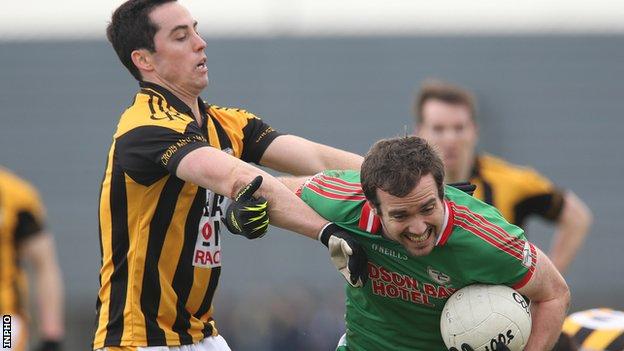 Crossmaglen's hopes of earning a third successive All-Ireland Club Football title were ended as they were edged out by St Brigid's in a niggly semi-final.

Frankie Dolan hit a goal as Brigid's led 1-2 to 0-1 but a Paul Hughes goal helped Cross lead by two at half-time.

Kyle Brennan missed a Cross goal chance but they still led by a point with six minutes left.

However, Conor McHugh's goal put Brigid's ahead and they held on as Cross's Kyle Carragher was sent off.

Crossmaglen were forced to make a late change to their starting line-up with Danny O'Callaghan replacing injured Aaron Cunningham and a number of knock-on switches also taking place.

Kyle Carragher did hit the opening score for Crossmaglen but St Brigid's responded emphatically with Dolan's deflected shot flying over Paul Hearty and into the roof of the net.

Further points from the impressive Cathal McHugh and Dolan extended St Brigid's lead to four but the margin was suddenly cut to the minimum as Hughes stormed forward to lash into a superb goal after great work by Johnny Hanratty and Jamie Clarke.

Aaron Kernan's point brought the sides level and Cross tagged on three further points before the break, which put them two ahead, after Brigid's had missed three straightforward frees, with Dolan (twice) and Senan Kilbride the culprits.

The key moment of the match came immediately after the interval as Brennan somehow blasted a goal chance wide from only three yards when it seemed easier to score.

Boosted by the let-off, points from Kilbride and Dolan had the sides level by the 37th minute and Cross morale wasn't helped by Stephen Kernan missing a couple of kickable frees.

By that stage, the Cross attack was struggling badly with Jamie Clarke posing the only significant threat.

Kernan was having to take on the free-taking duties as Oisin McConville had been forced off by injury late in the first half.

Cross looked to be about to stage another of their memorable escape acts as they responded with three straight points from David McKenna, Jamie Clarke and Aaron Kernan to lead by one with little over six minutes left.

However, a moment of sloppiness in the Cross defence then proved their undoing as Frankie Dolan picked up a loose ball and then squared for sub McHugh to poke into an empty net.

As Cross frustration grew, Carragher was sent off moments later after an incident which led to Brigid's goalkeeper Shane Curran ending up on the deck.

Cross did have their chances to force extra-time but Hanratty fired a bad wide after a period of pressure and Clarke's point in the second minute of injury-time still left the holders one point short.

The match had been littered with off-the-ball challenges and some cynical fouling and one could argue that the Connacht champions had been the greater offenders.

But that it unlikely to bother them a jot as their victory set up an All-Ireland decider against Ballymun Kickhams or Dr Crokes.