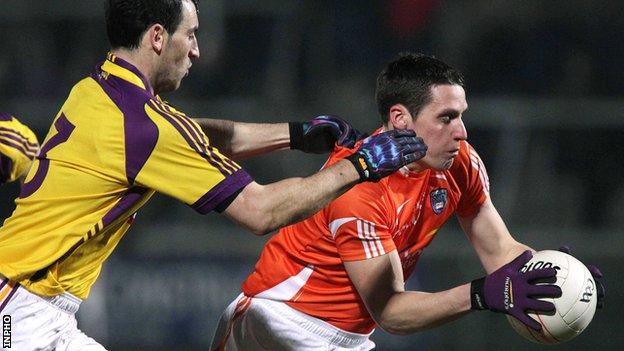 Armagh produced an incredible comeback to salvage a league point against Wexford at the Athletic Grounds.

The hosts trailed by 11 points at one stage in the first half but a hat-trick of goals from substitute Gavin McParland ignited the fightback.

Another sub, Stefan Campbell, added the final touches to an amazing fightback when he kicked the equaliser in the third minute of stoppage time.

Wexford's Rory Quinlivan was sent-off late on for a second yellow card.

Wexford were rampant in the first half with three goals in the opening 21 minutes from Paddy Byrne, Shane Roche and a penalty from Redmond Barry putting them 3-3 to 0-1 ahead.

An inexperienced Armagh defence struggled badly but substitute McParland grabbed a goal back for the home side before half-time.

Wexford held a commanding 3-3 to 1-1 advantage at the break.

Armagh could have done with having Jamie Clarke and Aaron Kernan available, but they committed to playing for Ulster in Sunday's inter-provincial football final against Leinster in Croke Park.

Paul Grimley's options were curtailed and he was forced to make three substitutions in the opening 30 minutes in a bid to curb a rampant Wexford side.

Another superb left-footed finish from Gavin McParland in the 55th minute got the supporters sensing a comeback was on the cards.

A footblock was called on James Lavery four minutes later, and the in-form McParland converted the penalty to reduce the deficit to three points.

The home side scored the last three points from Barry Loughran, Stefan Forker and a 30m equaliser from Campbell in the third minute of injury-time.