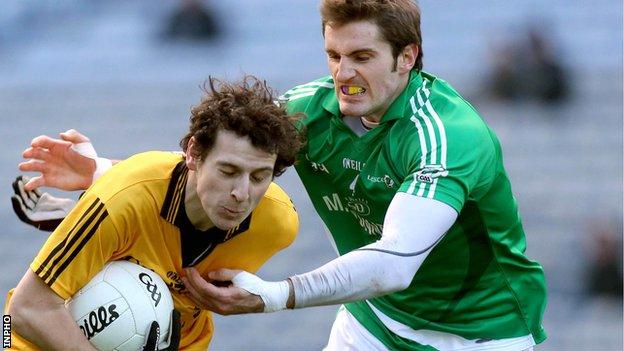 Ulster won a third inter-pro football title in a row under Joe Kernan with a 3-12 to 0-17 win over Leinster.

Two goals from Jamie Clarke, including a first-half penalty, and another from Monaghan forward Conor McManus helped Ulster recover from a bad start.

Derry defender Chrissy McKaigue was sent-off in the 69th minute for a second yellow card offence.

Dublin's star forward Bernard Brogan was the top-scorer for Leinster with 0-11, which included nine frees.

The GAA had hoped for a reasonable turnout from the public at Croke Park, with the proceeds going to charity.

However, the game was devoid of intensity or atmosphere in the big Croke Park stadium with just a few thousand paying customers.

Ulster, who lost Neil McGee to a back injury before the game, had a terrible start.

They trailed by six points after 18 minutes as Leinster's Dublin and Meath pairing of Bernard Brogan and Joe Sheridan wreaked havoc, scoring 0-5 from play between during that spell.

The damage would have been much worse only for two brilliant point-blank saves from Brogan by Tyrone goalkeeper Pascal McConnell.

Brogan skinned Armagh captain Ciaran McKeever, who had played a starring role in Armagh's league comeback against Wexford on Saturday night, and he was taken off at half-time.

Ulster got themselves back into the game when Kevin Niblock was fouled in the square, after a great run and pass from Peter Harte.

Clarke took the penalty and converted it, even though Stephen Cluxton got his right hand to the ball.

A brilliant strike from Conor McManus, after a pass from Clarke, put Ulster ahead five minutes into the second half.

Crossmaglen star Clarke banged in his second goal, this time with his weaker right foot, in the 53rd minute to put daylight between the teams, with Ulster five points clear.

Leinster went 39 minutes without scoring from play but Brogan's frees kept them in touch until Kevin McManamon's monster point broke their scoring drought.

Ulster maintained their cushion with points from Mark McHugh, Clarke and Sean Cavanagh.

Leinster finished strongly with points from Cluxton and Brogan, and although Derry defender McKaigue was sent-off for a second yellow card offence on Brogan, Ulster held on.