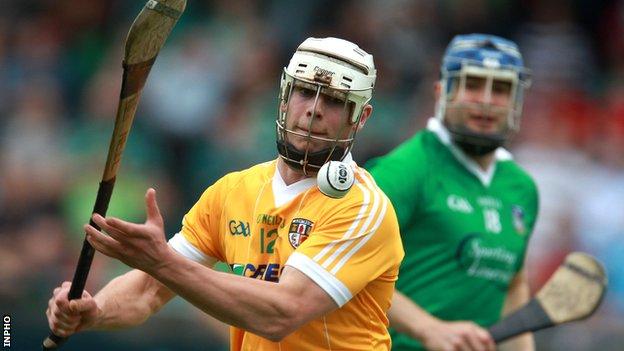 Antrim let slip a seven-point lead as Limerick fought back to win the NHL Division 1B opener on Sunday.

The visitors hit six points without reply midway through the first half before Neil McManus saw his penalty tipped over by Aaron Murphy.

Eight points from McManus helped Antrim into a 0-13 to 0-8 half-time lead.

Declan Hannon's four unanswered points triggered the comeback and David Breen netted on 56 minutes to give Limerick a lead which they easily maintained.

Scores were exchanged in the early changes before Antrim's six-point burst with McManus slotting over four along with points from KB McShane and Stephen Beattie.

Hannon halted Antrim's charge before McManus could only manage one point from his penalty following a foul on Karl Stewart.

Matthew Donnelly's point made it 0-13 to 0-7 but Limerick fired over the final two scores of the half to leave them five behind at the interval.

McManus added to his tally before Hannon sent over four straight points as Limerick upped the tempo.

The Saffrons were a point ahead when Breen netted the only goal and Limerick went on to score four of the next five points.

Antrim hit the last two points of the game through PJ O'Connell and McManus but Limerick had done enough to secure the points.

Elsewhere, Derry enjoyed a 2-19 to 0-10 win over Wicklow at Celtic Park in Division 2A but there were defeats for Down and Armagh in Division 2B.