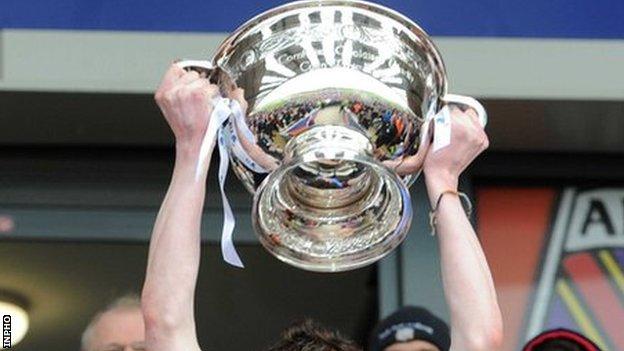 St Paul's Bessbrook are through to their first MacRory Cup final after a 2-12 to 1-6 win over St Macartan's Monaghan on Wednesday night.

The Armagh school, who have reached the decider in their first year in the competition, raced into a nine point lead with a Conor Nugent goal after 17 minutes putting them 1-6 to 0-0 ahead.

St Paul's led 1-7 to 1-3 at half-time and always looked comfortable.

They play either St Pat's Maghera or St Colman's in the final on 18 March.

St Paul's were MacLarnon Cup champions last year and they demonstrated flair and attacking class in reaching the final of the Ulster Colleges' premier competition.

Three points from Ciaran O'Hanlon and two each from Eoghan Burns and Blaine Malone had them well in control in the Athletic Grounds before Nugent's goal in the 17th minute.

It wasn't until the final ten minutes of the first half that St Macartan's started to trouble the Bessbrook defence.

St Paul's led by four points at the break and tightened their grip on the game with a superbly taken goal from substitute Caolan McCullough.

Despite the straight red card dismissal of defender Conor Boyle, Bessbrook held on with plenty to spare to book their place in the final.

St Pat's Maghera and St Colman's Newry will meet in a semi-final replay in Dunmoyle on Saturday at 14:00 GMT to decide who will play St Paul's in the final.

The final on 18 March will be shown live on BBC NI.