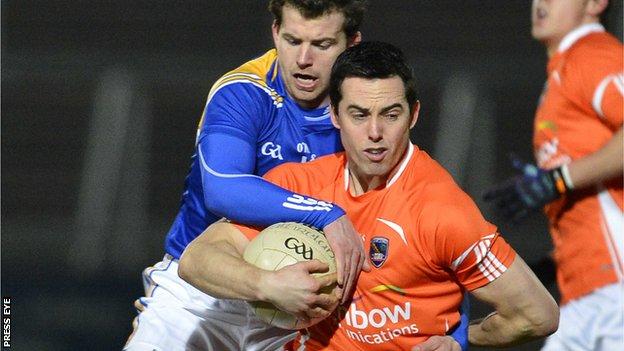 Armagh earned their first win of the Division 2 Football campaign but were made to battle by unlucky Longford.

The key moment came late on as Longford had a strong penalty call turned down with Tony Kernan hitting a goal seconds later to put six between the teams.

Armagh led by three at half-time and had to hold on in the closing moments after McGee hit his second goal.

Paul Grimley's side were boosted by the inclusion of Crossmaglen trio Jamie Clarke, Aaron Kernan and Johnny Hanratty.

The classy Clarke made an immediate impression as he struck a glorious goal after good work by Brendan Donaghy and Kevin Dyas.

Moments later, the lively Forker hammered in a second Armagh goal as the visitors appeared set to take a hammering.

However, a misjudgement by Crossmaglen club-man Stephen Finnegan allowed McGee to quickly respond with a Longford goal.

Almost immediately, fit-again Paul Barden had another goal chance for Longford but his effort was cleared off the line by Gary McCooey.

Points from Forker, Clarke and the influential Dyas extended Armagh's advantage to 2-3 to 1-2 but three Sean McCormack scores cut the margin to two by the interval.

Longford bossed the third quarter but they fired a series of bad wides with goalscorer McGee, Colm Smyth and McCormack among the culprits.

Two Aaron Kernan points extended Armagh's lead to four before a McGee score left a kick of the ball between the sides.

Then came the key play of the match as McCormack looked to have had his jersey blatantly tugged near the Armagh goals but referee Michael Duffy waved play on.

The home side immediately worked the ball downfield with Clarke's sublime pass setting up a goal chance for Brian Mallon and Tony Kernan netting the subsequent rebound after the keeper's save.

Longford manager Glenn Ryan was furious at Duffy's failure to award the penalty and appeared to continue his protests after the final whistle.

The goal gave Armagh breathing space at six ahead and they needed it as Longford then hit an unanswered 1-2 including McGee's second goal.

A superb Tony Kernan 45 in the closing seconds of normal time put further daylight between the teams as Armagh clinched their first win of the campaign to move up to three points from three games with Longford yet to open their account in Division 2.