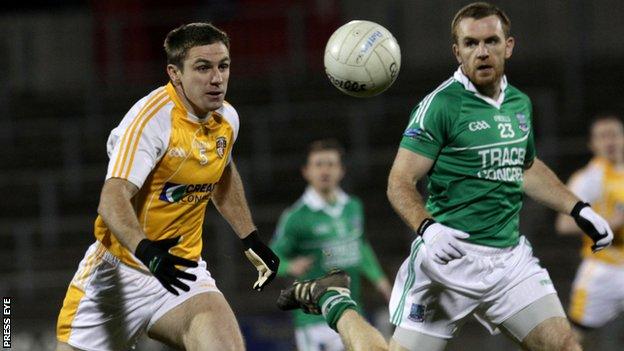 Kevin Niblock's 13th-minute goal put Antrim three ahead but Fermanagh drew level at 0-5 to 1-2 by half-time.

Daryl Keenan's goal straight after the break put Fermanagh three ahead and they moved into a 1-9 to 1-5 lead.

But Sean McVeigh's goal helped the Saffrons move 2-7 to 1-9 ahead and the sides swapped leads during the rest of the game before Paul Ward's leveller.

Fermanagh were forced to make late changes at midfield with Ryan Jones out because of illness and James Sherry missing after suffering a broken hand in training in midweek.

The injury could rule Sherry out of the rest of the League.

Ward and Brendan Herron exchanged points early on before Niblock strode through the Erne defence to lash to the net after good work by Conor Murray.

However, Fermanagh hit four of the remaining first-half scores with Tommy McElroy (two), Sean Quigley and Martin O'Brien on target.

Martin McGrath had a goal chance before the break but he lost possession at the crucial moment and the ball was cleared.

Fermanagh had the ball in the Antrim net immediately after the restart but the effort was ruled out because of a thrown ball.

However, within a minute the Ernemen had notched a legal goal as Keenan palmed to the net after Antrim keeper Chris Kerr had failed to deal with a high ball.

As the Ernemen threatened to take a firm grip on the contest, Sean Quigley then rattled with Antrim woodwork with the goal attempt before points from Quigley, Ward and Eoin Donnelly extended the visitors's lead to 1-9 to 1-5.

However, points from Ryan Murray and Thomas McCann cut Fermanagh's lead to two and McVeigh's goal then suddenly had the Saffrons in front.

Points from the Quigley brothers Sean and Conor restored Fermanagh's lead only for Thomas McCann and Conor Murray scores to edge Antrim ahead again.

However, Ward's injury-time point levelled proceedings once more before the final whistle.