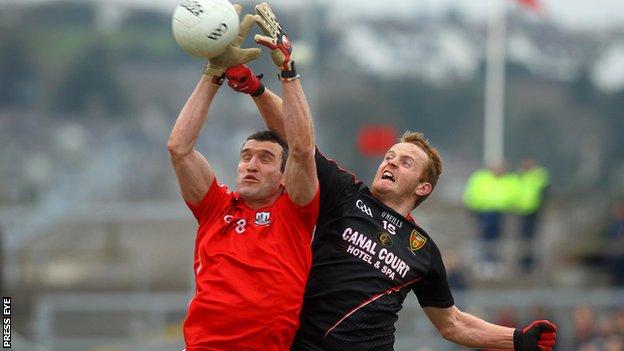 Down are in relegation trouble after suffering a galling last-gasp defeat by Cork in the Division 1 clash at Newry.

The Mournemen looked to have clinched victory as Donal O'Hare's nine points helped them to a two-point lead at the match entered injury-time.

However, Ciaran Sheehan's second goal of the match helped the Rebels snatch an unlikely victory.

Connaire Harrison's goal helped Down lead 1-9 to 2-4 at half-time with Tomas Clancy and Sheehan netting for Cork.

O'Hare hit four early points as Down moved into a 0-5 to 0-3 advantage.

However, hesitation in the Down defence gifted Cork's opening goal to Clancy after a high ball and the direct tactics caused difficulties for the home full-back line and keeper Michael Cunningham throughout the contest.

Down responded brilliantly to the sloppy goal as they hit outscored the visitors 1-4 to 0-1 to move into a 1-9 to 1-4 lead.

Harrison stormed through the Cork defence to hammer in a superb goal but the Rebels were back in the game almost immediately as keeper Cunningham's fumble rebounded off Sheehan and into the Down net.

Down still led 1-9 to 2-4 at the break but Cork came out fired up after the break as they notched six out of seven scores with Colm O'Neill and Donnacha O'Connor both contributing two points.

However, it was then the turn of Down to dominate as they struck five unanswered points with O'Hare bringing his tally up to a magnificent nine and Harrison and Kevin McKernan also on target to put the home side two ahead.

Cork twice closed to within a point of Down only for Aidan Carr and Conor Laverty to double the Mourne team's lead on both occasions.

That remained the margin in the final minute of added time but there was to be heartbreak for Down as Paul McComiskey lost possession and Cork worked the ball downfield before Sheehan blasted to the net.

The result leaves Down without a league point from their opening three matches and they will surely have to beat Mayo next weekend to have any chance of avoiding the drop.