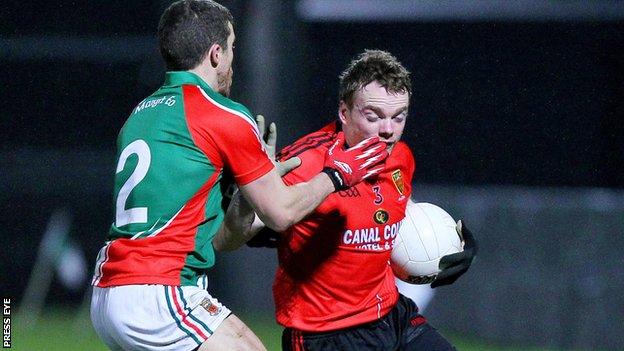 Donal O'Hare fired over two late points to give Down their first victory of the Division One campaign.

Down trailed by two points before fighting back to level and points from Conor Laverty and Ryan Mallon put them 0-6 to 0-4 ahead at half-time.

O'Hare slotted over twice as Down moved five clear but Mayo launched a comeback and Kenneth O'Malley tied the match with five minutes left.

O'Hare's late show won it for Down as he finished with nine points.

Down capitalised on scoring the last two points of the first half at Pairc Esler by opening up a commanding lead on the restart.

O'Hare's double was followed by a Mark Poland point but Mayo ensured this would not be an easy Down victory.

O'Hare edged Down in front, only for O'Malley to make it all-square going into the last five minutes.

Down restored the point advantage thanks to O'Hare and the forward completed an excellent display with a superb score to seal victory.

"The feeling is one of relief and it is an absolutely massive two points for us," said Down defender Aidan Carr.

"Mayo put it up to us and we were clinging on at the end but Donal O'Hare scored two great points to win it."