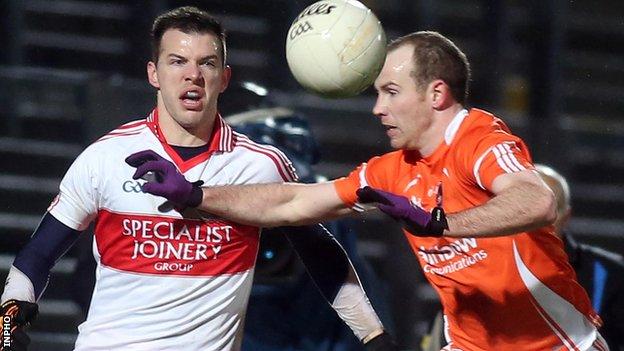 Armagh raced into a four-point lead but Derry hit back and three James Kielt points helped the hosts to a 0-7 to 0-6 advantage at the break at Celtic Park.

Aaron Kernan slotted over three points as Armagh pulled clear, only for the Oak Leafers to respond again and Kielt's free moved them a point ahead.

Johnny Hanratty's score left Armagh trailing by a point at half-time and the start of the second period was a repeat of first with the Orchard team in charge.

Declan McKenna opted to take a point instead of going for goal but it took Armagh four clear.

Derry were not top be denied and hit four without reply, including an Enda Lynn point which put the Oak Leafers ahead.

Clarke equalised with a superb free and added another point after Kielt had briefly restored Derry's advantage.

Lynch failed to find the target with an injury-time free as the all-Ulster affair ended in a draw to leave Armagh top on points difference.

"It was a good game and a fair result," said James Kielt, who finished with eight points.

"We were four points down with 25 minutes to go but we showed character and could have won it at the end."